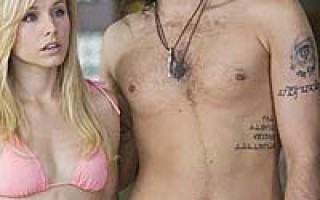 Fear Itself and The Top 10 Scariest Movies Ever


When, in his first inaugural address, US President Franklin Delano Roosevelt stated that, “the only thing we have to fear is fear itself” he wasn’t necessarily talking about the nature of horror in television and film. The main thrust of his speech was that, in wretched economic times, hope and a positive attitude were integral […]


As I rode back from the airport yesterday, my car passed a bevy of Blue Blood hotties including Roxy Contin and others, all decked out and waving Doomsday signs. This reminded me that I wanted to tell you all about the upcoming flick. (These two things are related; they were promoting the movie, not predicting […]


Cloverfield opens this weekend. Even though I requested their normal press releases, the Cloverfield people inexplicably did not get them to me in time. But they were kind enough to give us money, so I thought I’d post their trailer here. Watch the trailer and see if you can tell me what this movie is […]

Getting Paid to Puke and Scream


My mama always told me to find something I’m good at and to then apply it in my day-to-day life. I’m one hell of a screamer. Throughout the years, I’ve developed a decent name for my screams on stage with my music, but one day my dream happened. A good friend of mine, Joseph Bishara […]


When a bunch of my friends went to see Nightmare Before Christmas for Halloween, I took a pass. I think director Tim Burton has one of the most beautiful and impressively realized aesthetics in film today. Unfortunately it bums me out that his misunderstood and offbeat heroes and heroines often accept their second class citizen […]

The Outlaw Haberdashery of Danger and The Wild One


Every once in a while, I like to watch old black and white movies. I’m particularly partial to ones where men speak in clipped strong rhythms and people get murdered. But I’m open-minded and my TiVo recently suggested that I try watching The Wild One. The Wild One is the classic 50’s flick where Marlon […]