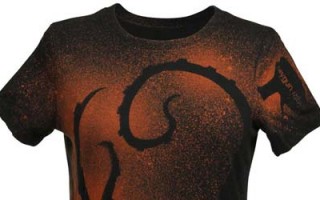 
Raygun Robyn‘s cool handmade tentacle babydoll T-shirts are now available at Think Geek! Free Hugs! You know, it’s a revelation when you see a DIY project you did in high school done really well. “Oh, so THAT’S what it’s supposed to look like.” That’s exactly what we thought when we saw this bleach-stenciled apparel. For […]