The Alamo Drafthouse is showing special advance screenings of the Fright Night reboot. I consider myself a bit of a connoisseur when it comes to event swag, but I’m impressed and amused by toy axes as a giveaway for a horror movie. 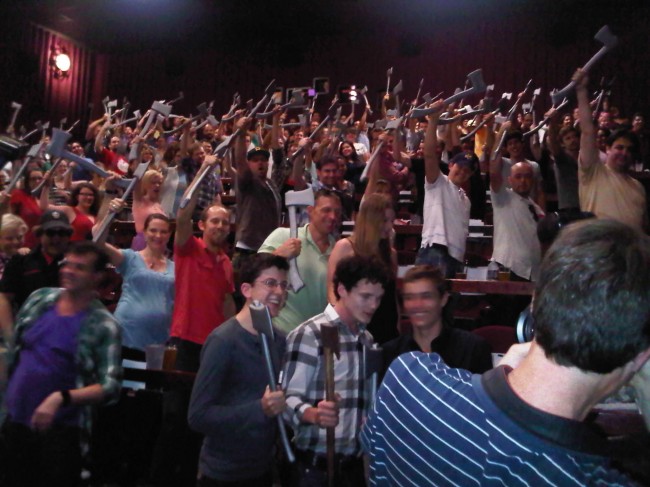 When you think about it, the “life” of a vampire must get pretty boring after awhile. Really, how many decades of snoozing in your lonely castle and/or crypt by day and lurking around munching on virgins and villagers at night can even the most bloodlust-y vamp take before getting, well, deeply bored? That’s probably why FRIGHT NIGHT’s vampire Jerry moved to the suburbs. He just needed a change of scene. But, as the saying goes, you can take the vamp out of the slavic countryside… but he’s just going to keep tearing people’s throats out and raising hell wherever he goes.

The original FRIGHT NIGHT is an undisputed ’80s comedy-horror classic that entertained/traumatized a generation’s worth of kids at sleepovers and introduced many of those youngins to the camptastic glory that is Roddy McDowall. Now for 2011, director Craig Gillespie and writer Marti Noxon (TV’s Buffy the Vampire Slayer!) are serving up a re-vamped FRIGHT NIGHT that’s likely to inspire laughs/nightmares in a whole new generation of filmgoers. It also features a pretty winsome cast that includes Anton Yelchin (STAR TREK), Christopher Mintz-Plasse (SUPERBAD, KICK-ASS), Toni Colette (LITTLE MISS SUNSHINE, Showtime’s The United States of Tara), Colin Farrell as the vamp terror with a wholesome name, and David Tennant (Dr. Who) picking up Sir Roddy’s mantle as Peter Vincent.

So come on out of your caskets, blood fiends, and join us for a FREE sneak peak at this new take on FRIGHT NIGHT. It’s going to be a fang-tastic night of entertainment featuring bloody good food specials, bloody disgusting pre-film shenanigans and more surprises than you can shake a stake at.

In DreamWorks Pictures’ “Fright Night,” senior Charley Brewster (Anton Yelchin) finally has it all—he’s running with the popular crowd and dating the hottest girl in high school. In fact, he’s so cool he’s even dissing his best friend Ed (Christopher Mintz-Plasse). But trouble arrives when an intriguing stranger Jerry (Colin Farrell) moves in next door. He seems like a great guy at first, but there’s something not quite right— yet no one, including Charley’s mom (Toni Collette), seems to notice! After witnessing some very unusual activity, Charley comes to an unmistakable conclusion: Jerry is a vampire preying on his neighborhood. Unable to convince anyone that he’s telling the truth, Charley has to find a way to get rid of the monster himself in this Craig Gillespie-helmed revamp of the comedy-horror classic.

Posted by Amelia G on August 17, 2011. Filed under Headline, Popcorn, Trade/Business. You can follow any responses to this entry through the RSS 2.0. You can leave a response or trackback to this entry
Tags: 3d, alamo drafthouse, alamo s lamar, ax, fright night, horror, swag