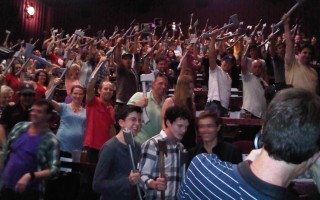 
The Alamo Drafthouse is showing special advance screenings of the Fright Night reboot. I consider myself a bit of a connoisseur when it comes to event swag, but I’m impressed and amused by toy axes as a giveaway for a horror movie. Tuesday, August 16th 7:30PM Alamo S. Lamar When you think about it, the […]

Blue Blood Had a Blast Exhibiting at Erotica LA 2006


Snaspshots from Erotica LA 2006: – Friday Snapshots – Saturday Snapshots – Sunday Snapshots I now have clean laundry, but I may not be able to wear it too many places. Allow me to explain. This past weekend was Blue Blood’s and my first year exhibiting at Erotica LA. Back when Forrest Black and I […]