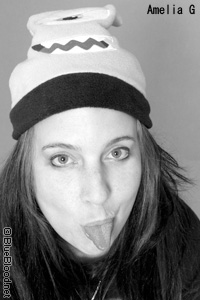 In March of 2003 I wrote an opening editorial for the late lamented Swag magazine project. The editorial was about how a lot of freaks internalize the negativity the larger society has for them. It was about how punk was supposed to promise the allure of a classless society. It was about how we shouldn’t hammer ourselves down because we deserve the rewards of the larger society, at least as much as anyone. The mere existence of this editorial is ironic in so many ways. I have no idea how many people read this the first time around, though, so I’d like to share it online now.

You should also definitely read the piece on Swag, by my old school, zine explosion compatriot Scott Hefflon, which ran first in Lollipop in print, and is now reprinted on Lollipop online. Part of what Scott had to say about the content Forrest Black and I and our pals created was, “It’s really surprising how rarely you find something unique in these “alternative” times. So many things still tow the line, the line is just called something else . . . So yeah, on the surface, Swag could look like a Gothic fashion mag. Lots of scantily-clad vixens, most of them models for one of the sites under the Blue Blood umbrella, but seeing as Amelia G and Forrest Black are top-notch Goth/fetish photographers and have great taste in hotties as well as the few bits of clothing the models wear, that’s far from a bad thing . . . What makes Swag cool is what doesn’t become clear right at first. Style . . . It was fun, I learned a couple things, and there was no nostagia back-in-my-day shit or mindless bashing of how everything sucks now and everyone’s a sell-out. No, it was well-researched bashing – funny, but not hatefully hipster ironic – and it read like something I’d write, or something one of my friends’d write. I wanna buy the writer a drink and see what they say next. That’s good writing, right? Hell, I even read Amelia G’s one-pager about buying a fuckin’ car. Sure, I know she can write and all, but who the hell care what car she bought and why and what it means to her? By the end of her story, I did. Who knew? It was a little tough to read cuz the text was one column across the entire page, but I read the whole thing, liked it, and I wanna buy Amelia G a drink to see what else she has to say. (OK, maybe I just wanna get her drunk. Heh.) . . . All in all, a damn fine publication, and one quite unlike anything else out there. And it’s got layers, baby, cuz these are not stupid fuckin’ posers spouting hipster slogans, parroting some review they just read and passing it off as their own wit. There’s eye candy, there’s smart, attitude-laced editorial (without being needlessly vicious), and there’s coverage of topics you didn’t know you were interested in until you found yourself absorbed in the piece.” Go to Lollipop and check out the whole feature on Swag there.

And now for the promised editorial: 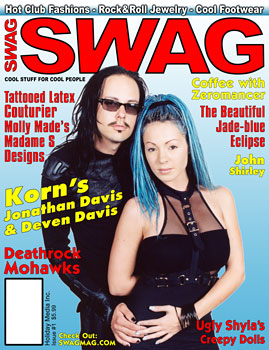 I admit that sometimes I get discouraged with my subculture lifestyle. I think to myself that I started down this path by choice and maybe it is not too late to change direction. I think that, now that I have finally paid off my student loans and gotten my brain out of hock, maybe I should go back to school. Maybe business school could beat the importance of money into my head. Maybe I should become an attorney like my father. Maybe, at a bare minimum, I should steer my photography and writing towards more mainstream subjects.

There are a variety of things which will make me spin out into the headspace where I think such things. Inconsistent friends pretty much top the list. We’ve all known people who were our friends one day and the next they were blabbing our confidences or talking trash and then the next day they thought they could just be pals again. I’m not talking about plastic Los Angeles fair weather friends. Those are honest in their fashion and all you have to do to keep them pleasant is to keep doing well. I’m talking about alterna-identified people who have such deep-seated unhappiness about where they are at that they strike out at those closest to them because they just feel upset and are sure it must be somebody else’s fault. One of my pet peeves is cool counterculture girls who get to a certain age and start obsessing on how classy they are.

I became the sort of person I am today partly because my parents raised me to be without prejudice of class, color, or religion. On the face of it, one might think that bringing a child up to be genuinely colorblind was a very virtuous act. I believe it was. Of course those are the values I was brought up with, so I am biased. But it certainly contributes to my sense of alienation because some of the artificial things that other people use to identify supposedly kindred spirits just don’t apply for me.

One of the things which first attracted me to the counterculture was the lack of class boundaries. It was up to the individual what impression to make. You could be cool whether your parents were rich or poor, educated or illiterate, prominent in the community or living in another country. The lack of boundaries also meant a rich cross-pollination of ideas because everyone had a different background and there was not a this-is-the-way-it-has-always-been mentality.

Okay, over time, I have realized that there is one hidebound idea which really bothers me but which is endemic to subcultures. There is the notion that freaks should not be successful. This self-defeating sentiment can be found throughout most of the counterculture, whatever the specific affiliation of the people involved might be – Gothic, punk, deathrock, rockabilly, fetish, hippie, altrock, etc. No matter what I believe intellectually, my inner punk rocker believes that, on some level, success equals oppression. No matter how hard you work for it. On some level, like any minority, I have internalized the prejudice of the mainstream. I’ve been told that my weird hair and my perceived sexuality and my leather jacket all mean I do not deserve to be successful.

Well, the point here is to tell my inner punk rocker that there are rewards for being cool. Being able to express yourself with your appearance and being able to enjoy unique cool stuff are important rewards for taking the road less traveled.

And I deserve those rewards. And so do you.