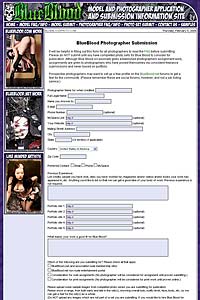 Last month, Blue Blood made a submissions site live for models and photographers and writer/photographers to submit to various Blue Blood projects, mostly BlueBlood.com and, to a lesser extent, BlueBlood.net. Blue Blood enjoys publishing a variety of body types, both male and female and in between. The most important thing for modeling for Blue Blood is that someone have that certain something, star quality, individuality, passion of personal expression to put in front of the lens. The original Blue Blood magazine in print featured exclusively interactive pictorials of people who were lovers in real life, who would be doing what they were doing, whether or not a camera was present. Non-feature photos in Blue Blood in print were generally related to specific entertainment news or how-to articles.

BlueBlood.com features pin-up and interactive erotica photo sets where all the images in a particular gallery will be of a person or couple, in one setting, in a series, which generally tells some sort of story. BlueBlood.net, of course, features articles and galleries about cool events, genre movies, goth-industrial music, punk nightclubs, interesting clothes, and similar fun stuff i.e. BlueBlood.net publishes photo galleries which are about a particular topic of interest. You would think that more photographers would shoot entertainment news, fashion, and music work than shoot nudes, but apparently that is not really the case. I’ve found that the most common question I get from interested photographers is what the galleries on BlueBlood.net should be about. Somehow, once the naked aspect is removed, many of them don’t know what the photos are about, other than that there is a photographer who happens to take pictures. I am baffled that there are people who consider themselves Photographers with a capital P and have no idea what their work is supposed to be saying.

I entirely understand, however, why many models are confused by the submission process and gunshy about asking questions. Running a site can be stressful and there are never enough hours in the day, but I’m genuinely kinda weirded out by how many site operators or model coordinators hate to answer questions from models. I’m always happy to answer anyone I might work with’s questions beforehand. It makes me ballistic when people try to go back on their word, once they have made an agreement, but, to me, that just means everything should be entirely clear from the beginning. The most common question I get from interested models, once they have read the Blue Blood Photo FAQ is almost the opposite of the most popular photographer question. Models are puzzled by the whole nudity vs. clothes thing. Some models don’t seem to get that they have to keep their clothing on for BlueBlood.net editorial. By the same token, any model who has even considered modeling for a membership site besides BlueBlood.com wants to double-check precisely what she must do on camera and what she must not do. This is because of the way these models have been pressured to do either less (nice girls only do conservative nudes) or more (all the cool girls give strangers blowjobs) by sites they have considered working with. I really don’t get the thing where some sites feel like everyone has to be fully nude but nobody is allowed to (heavens to Betsy!) insert anything or where some sites have the attitude that anyone who hasn’t fucked everyone else on it shouldn’t be allowed in the clubhouse. It really bothers me that there are models who go along with this conformity BS and peer pressure other models to only do exactly what they have decided is okay for them personally, no matter whether other models personally prefer to be more conservative or more extreme. These are not decisions which should be made via groupthink.

If everybody on BlueBlood.com was doing the exact same level of nudity or naughtiness, with the exact same amount of explicitness or lack thereof in presentation, that would be as antithetical to the point of Blue Blood as if everybody looked exactly the same. (You are not required to have tattoos either; they are optional and only a plus if you got them for a meaningful reason or they are quality ink or ideally both.) Of course, all publications have to have some sort of structure, a certain promise to the reader of what they will find inside. However, any pay site with a bunch of chicks who look the same and apparently all want to get the exact same amount naked is just pandering to a fetish and it is not punk and it is not about freedom.

Many of Blue Blood’s photographers and writers and models, and certainly your truly, have fetishes too and naturally they are more likely to be represented in the variety of BlueBlood.com content than kinks various creative team members are less into, but Blue Blood doesn’t have all the hang-ups so many of the sites seem to about nudity. The whole point is that it is about individual expressions of sexuality and sensuality. Individuality is key. If all a photograph does is hit a format, that is not art, just commerce. If a photo utterly fails to hit any format, that is not art either, just wanking. For photography to be art, it must both express something and communicate something.

Posted by Amelia G on February 6, 2009. Filed under Blue Blood. You can follow any responses to this entry through the RSS 2.0. You can leave a response or trackback to this entry
Tags: art, Blue Blood, blue blood, conformist, conformity, erotica, goth, industrial, magazine, model-application, movies, nightclubs, photograph, photographs, photography, photos, punk