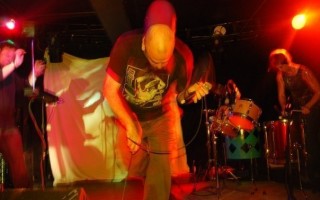 
“If Industrial is dead I’m f**king the corpse.” So goes the description on Caustic‘s Facebook page. Listening to this remix heap, I found it easy to imagine lots of pelvic thrusts in the studio and across the mixing board. Only a labor of love could be produced from that experience, right? Matt Fanale‘s tracks are […]


Peter Spilles of Project Pitchfork fame bursts back onto the scene with his partner in crime Jinxy for “Scum,” the latest single of side project Santa Hates You. Replete with aggressive, in-your-face electro and a juxtaposition of venomous vocals, the music video chronicles the sinister duo as they trudge through society’s seedy underbelly to rid […]


I was just checking up on Twist Magazine, which is a cool alternative webzine out of Sweden that I like. You’ll need a translator for a lot of the articles but they feature some great concert photos from current tours with bands like Dimmu Borgir and Skinny Puppy. Twist just put up a massive seven […]


Our old school DC friends Ego Likeness have extended their tour in support of their recent album Breedless and if you haven’t had a chance to catch them live, you really should rectify that. I really like this album a lot. Donna Lynch has a beautiful haunting and powerful voice that sounds so good poured […]


Okay, I’d like to take this opportunity to make a public service announcement. Trent Reznor announced that he was giving away free downloads of his new Strobelight album, produced by Timbaland, on April first. This seemed both hilarious and topical as Blue Blood has covered goth-industrial music since 1992 and even the Blue Blood precursor […]