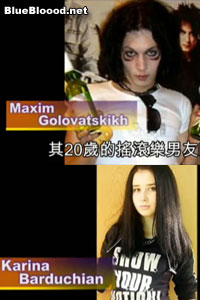 Maxim Golovatskikh might be hot and in a band, but he is a butcher. Well, actually a year ago that was pretty literally true, on multiple levels, but he has been in jail awaiting trial since then. See Maxim Golovatskikh was a goth boy in a band who worked as a butcher to pay his rent in a gothic group house in St Petersburg.

Unfortunately, it was Maxim Golovatskikh’s misfortune to have a cute emo girl get all hot for him. Cute emo Karina Barduchian was so into Maxim Golovatskikh that she kept right on going over to his place, even afer her mother forbade her to see him. The problem was he and his housemates were all goth-identified, but this Karina Barduchian chick was all emo and hanging out at their party pad, just flaunting her vulnerable cute girl killability. It has also been widely reported that she made fun of really uncute goth boy Yuri Mozhnov for being a florist and she was just really emo, ya know.

So, obviously, the only rational thing for Maxim Golovatskikh and Yuri Mozhnov to do was to wait until the festivities wound down and then drown Karina Barduchian in the bathtub. And cook the tastiest parts of her remains and serve them to their unsuspecting housemate Ekaterina Zinovyeva as a hearty breakfast with potatoes.

Now I’m kind of a foodie, so I used to be curious about cannibalism. Sorta grew out of it. Just a phase I guess. There have been certain warrior tribes who ate portions of fallen foes to gain some of their power, but how much mojo can one get from a cute emo girl with a crush on a gothic boi in a band? Kellie LaPlegua recently did a performance where she and AMF‘s Louis Fleischauer ate small portions of each other’s raw flesh. But this was consensual.

This Russian gothic cannibal murder is in the news again because the perps finally came to trial and Ekaterina Zinovyeva just gave testimony. And one of the jurors had to be excused after becoming ill on viewing some of the evidence photos.

Mind you, there is no question that Maxim Golovatskikh and Yuri Mozhnov murdered Karina Barduchian and then went cannibal on her and distributed what remained in a bunch of garbage bags dumped around the city of St Petersburg. They admitted their crimes immediately.

Their excuse? Maxim Golovatskikh and Yuri Mozhnov explained that they were just really drunk and hungry. For the love of all that is black eyeliner, people, that excuse only sometimes works to explain why you snogged someone other than your girlfriend; as a murder justification, it just sucks. I know that, if the Russians have any sort of insanity plea, the goth bois will probably fall into that category. They don’t seem as weird or alien as I would prefer, however.

On one level, there is a seriously high level of black humor to the whole unfolding of events. On another level, a girl lost her life and a mother lost a daughter and something genuinely tragic and awful happened. Only this tragedy doesn’t seem far-fetched enough to me. It feels too much like something which could have happened to someone I know, without the world being all that different a place. Joking about evil = funny; doing evil = sucking. It seems like it shouldn’t feel uncomfortably controversial to suggest that committing evil acts is, ya know, bad.

Industrial mag Side Line somehow spotted that a Hong Kong video site had created a reconstruction of events. It is sort of World of Warcraft style and not super grisly. It is humorous, in a very very dark way, if looked at just right:

Posted by Amelia G on April 13, 2010. Filed under Blue Blood. You can follow any responses to this entry through the RSS 2.0. You can leave a response or trackback to this entry
Tags: amf, cannibal, cannibalism, drunk, emo, evil, eyeliner, foodie, goth, gothic, industrial, kellie, kill, louis fleischauer, weird