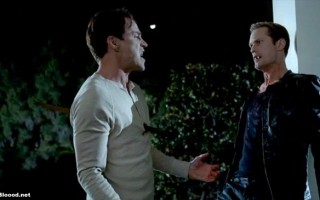 The Following – The End is Near


We can do this. There are only two more episodes that we have to sit through in this season. What happened to us, The Following? In the beginning we were all, hey, what’s up. And now we’re all, please make it stop. Where did we go so wrong? I thought we had something special. I […]

The Following – The Curse


We’re wrapping up this season with three episodes after tonight, hard to see exactly there this is all gonna go, but they better do it quick. Nice try, Claire, like running out of the compound was EVER gonna work. You didn’t even try to fight your way out? Now you got a Tracy Morgan anklet, […]


The new issue of Auxiliary Magazine is out for October/November. I like that they went kinda deathrock with the current cover feature, shot by photographer Zach Rose and featuring models Anna Cadaverous and Jiffy Decay. Hope to see more of these folks. This issue also features some ballgown action and I’m always happy to see […]


Sasha Grey plays the faithless love in the new video for Space Bound by Eminem. I’ve said it before and I’ll say it again (extra often if pressed): Eminem is one of the strongest gothic artists performing today. Space Bound is bullet-through-your-brains-brokenhearted level gothtastic.


New season of True Blood kicks off today. It has a tough act to follow, after last week’s amazing HBO finale action. I kinda liked True Blood season 1 the best, when Bill and Sookie looked happy together. I’m looking forward to season 4 anyway. Folks without HBO or away from the televisions can watch […]


I am not usually a fan of art which is fleeting or the whole schtick of destroying what one has created. One of the reasons I shoot is to give some permanence to the ephemeral. But artist Nicole Dextras is doing some really exceptional work in vanishing work. I am particularly impressed with her series […]


A long time ago, in a land far from here, my punk rock group house Cambodia held a screening of a double feature of Edward Scissorhands and Edward Penishands. I’m going to go out on a limb here and say that Edward Scissorhands was in fact the better movie, but it was still a really […]


Liblr is one of the most perfect uses of the internet I have ever seen. It is simple and ridiculous and fun. And the name is clever. I don’t know if elementary and junior high school kids still play with Mad Libs, but there used to be these books with lots of blanks in various […]