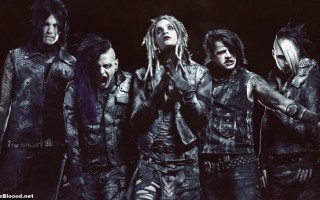 
Any album that kicks off with a psychotic nursery rhyme sung by school children is indicative of only pure musical mayhem, and the searing firepower of Davey Suicide is a mushroom cloud leaving music fans everywhere in smithereens. Mr. Suicide’s full-length album Put Our Trust in Suicide is a machine-gun meltdown of pummeling heavy metal […]

David Bowie – Where Are We Now


The Thin White Duke is back? Ziggy is resurrected? Major Tom has returned to Earth? Whatever the case, David Bowie moseys on in after his hiatus with a relaxed stroll rather than a dramatic burst. His newest single “Where Are We Now” is rich in orchestral relaxations of pianos and strings, Bowie’s unmistakable voice gliding […]

The Deadfly Ensemble – Flight of the Invisible Siamese Three-Year-Olds

- by Zander in Music, Video


A creepy folk tune with rumbling soundscapes and haunted vocals could be properly complemented only by an equally creepy video. The animation, completed as part of Natalie Cheetham‘s final major project at uni, reeks of a Gothic fairytale taking a note from haunted house flicks, Tim Burton, and childlike playfulness for that extra touch of […]


“If Industrial is dead I’m f**king the corpse.” So goes the description on Caustic‘s Facebook page. Listening to this remix heap, I found it easy to imagine lots of pelvic thrusts in the studio and across the mixing board. Only a labor of love could be produced from that experience, right? Matt Fanale‘s tracks are […]


Metropolis recording artist Front Line Assembly’s newest release is AirMech. What can you expect from one of the pioneers of EBM and industrial music? It seems inevitable that every new album will be held under the microscope, for better or worse. AirMech, however, marks a shift from thrashing dance fest to something dark, slow, and […]


Peter Spilles of Project Pitchfork fame bursts back onto the scene with his partner in crime Jinxy for “Scum,” the latest single of side project Santa Hates You. Replete with aggressive, in-your-face electro and a juxtaposition of venomous vocals, the music video chronicles the sinister duo as they trudge through society’s seedy underbelly to rid […]