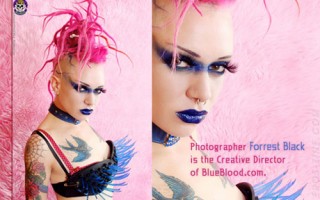 
The Friday of the 2006 Comic Con, I only busted out my camera when really motivated because we’d gone on the Superhero and Supervillian-themed party bus the night before and, after a couple of days in the oppressive San Diego heat, I was slowing down. Still managed to shoot a nice little photo gallery for […]


BlueBlood.com hottie Halcyon’s Cocky Bastard Vision from the Pink Broadcasting Company did two entertaining videos on the 2007 SXSW experience. Halcyon has been going to SXSW basically forever, has MC’ed more of the SXSW Web Awards than he hasn’t, and introduced me to the Interactive portion of the show when we did our “Turning Pink […]

No Matter Where You Go: Austin SXSW 2005


This feature was originally published May 18, 2005. With this year’s SXSW looming close, I thought it would be fun to bring it back. –Amelia G photography by Forrest Black Every time I take a trip to some place which is not Manhattan or San Francisco, I start drooling at real estate. Property is at […]


When Kevin, from that shadowy organization known as The Brotherhood, asked if Blue Blood wanted to kick in to rent a double decker bus to tote 70 Santas around San Diego, I was definitely down. I already own multiple Santa hats. For some reason, I really really like Santa hats. My only difficulty was in […]