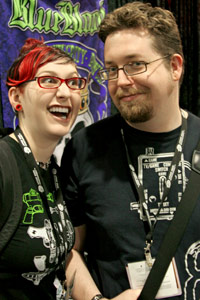 The Friday of the 2006 Comic Con, I only busted out my camera when really motivated because we’d gone on the Superhero and Supervillian-themed party bus the night before and, after a couple of days in the oppressive San Diego heat, I was slowing down. Still managed to shoot a nice little photo gallery for your viewing pleasure.

I was super-excited to get to see the very entertaining horror screenwriter and producer Sean Abley. Oddly enough, although he and I live literally across the street from one another, I met my neighbor online first and neither of us remembers precisely how. At any rate, he is a great wit and his Dark Blue Productions darkly humorous science fiction feature Socket is showing at the Los Angeles Outfest this Friday, so I highly recommend Angelenos stop by and check it out. (More on this later.)

Those of you who have been with us and Blue Blood since before the beginning will of course remember Black Leather Times, my punk humor zine, more affectionately (or hostilely) known as BLT. Drew “Vladimir Drakovich, King of Mars” Boyd wrote and, with Max Glick, co-wrote a number of humorous articles for BLT back in the crew’s DC days. I had the pleasure of running into Andrew Boyd in our booth at Comic Con and he hooked me and Forrest Black up with some kindly personalized Scurvy Dogs. Andrew Boyd’s publisher AiT/Planet Lar classifies Scurvy Dogs as a cult classic on their web site. This tale of pirates gone astray, co-written with Ryan Yount, absolutely deserves the status.

Sometimes I find conventions difficult because my mental Rolodex is kind of full and I always feel awful when I forget people, but I’ve met a heck of a lot of people over the years. Weirdly enough, when Andrew Boyd stopped by the megabooth, I was just like, “yay, hi Drew!” and it didn’t even occur to me until later that it was vaguely odd that I knew him immediately, without having to give placing him any thought at all, when he has, for hell’s sake, grown facial hair since I saw him last. (More on this later too.)

BlueBlood.com hottie Diana Knight was also in the house. I took photos while riding the giant escalator to show how cool some of the architecture of the San Diego Conventions Center actually is. A hot Asian artist stopped by the megabooth and I took a few snapshots of him. When I say hot, in this instance, I mean as in sexy, as opposed to as in warm or popular. He might be super popular, but I was pretty wilted from how hot it was (in temperature in both San Diego in general and the building in specific) so I had more trouble with the language barrier than I generally would. He had a professional illustrator badge, but his name was in (I think) Japanese. Cool costume anyway and getting to know people is harder at West Coast cons than East Coast ones, even under ideal circumstances. Maybe this is why I still have instant recognition for my pals from East Coast punk and fandom misbehavior.

Posted by Amelia G on July 18, 2007. Filed under Blue Blood. You can follow any responses to this entry through the RSS 2.0. You can leave a response or trackback to this entry
Tags: andrew_boyd, black leather times, blt, comiccon, comic_con, fandom, forrestblack, hot, king_of_mars, outfest, punk, scurvy_dogs, sean-abley, socket