The first time I went to a science fiction convention was with the Wesleyan Science Fiction Club when I was around 17. It was Boskone in Boston. My friend Sue and I ran around the convention in crazy outfits we hoped were sexy, meeting all kinds of people, discussing books we had previously read in a more solitary way, and checking out lots and lots of hot pasty-faced D&D boys. It is funny that the boys seemed very important at the time, but what I remember most vividly now is Sue and the fandom community. I met people like a bearded gent named Jailbait because he had been going to conventions since he was a young tyke. I heard about the whole concept of Fandom As A Way of Life with the folks whose whole social lives revolved around going to cons all up and down the Eastern seaboard. While cons were never my only social outlet, I have surely attended a lot of them. As an attendee, as a guest, as an exhibitor, and as a crashing miscreant. Before I moved to the West Coast, my roaming range stretched from Boston to New Orleans.

Once I graduated from Wesleyan and ended up at Cambodia (the storied DC punk group house, not the country), I started publishing Black Leather Times with the help of my unsavory pals. At every convention we would go to, we would have a new issue and we’d give out thousands of copies of BLT for free. Each issue had a theme and some of the fandom themes were the apt D&D/B&D issue, the traditional Science Fiction and Fantasy issue (Spock ears versus elf ears!), and the conventions issue a.k.a. How Amelia’s Unsavory Pals Feel About Cons — Mostly About the Sex Part. (You can visit Kickstarter for what BLT has planned for its 25 year anniversary.)

I went to Comic Con for the first time not that long after Forrest Black and I arrived in Southern California. Angelenos suck at estimating how long a drive is, or at least they did before Wayze and Google Maps, so everyone told us that it would only take like 2 hours to get to San Diego from Hollywood. It actually took all day because, even then, Comic Con was so huge that it had an extreme impact on traffic patterns. I don’t recall what magazine we were covering the event for. Maybe Marquis. At any rate, we were there both for our own interests and a publication was depending on us to come back with press coverage. I believe in giving my all to deliver as promised, so this made us doubly hellbent on getting to the convention. We finished with press registration at the very end of the day and the exhibits were closing up.

We had planned to go for only one day, but we hadn’t seen anything yet, so we needed to find a hotel. During Comic Con. In San Diego. We literally walked the whole Gaslamp district, asking, at every place from corporate hotels to flophouses, whether they had rooms available. Finally, around midnight, the beautiful Horton Grand had availability from someone who had missed their connecting flight from Paris. So we ended up in a lovely boutique hotel, in a historic location that used to be a brothel. But it took a lot of wear and tear and extra bother and then there were no groups of people wearing costumes and/or black in the hallways, getting into mischief and LARPing and deconstructing Bladerunner and William Gibson.

When we got to the convention, I was surprising to see so little costuming, after people had raved about the outfits. There were tons of people there and we ran into a lot of folks we know, including various comic book fan rockstars wandering around. That was cool, but, on the overall, it seemed like just a really big store.

I’ve been back to Comic Con a number of times since, both as press and as an exhibitor. The show itself will allow a corporate movie like SAW to have hundred foot banners with severed body parts flying in public. But they will be bitchy about SFW flyers for indie NSFW products on the flyer table. There are literally lines for any panel you’d want to attend. The convention center A/C is not up to the task at hand. Cosplay is on an uptick, which is visually nice and I give kudos for that. One of the last times I exhibited at Comic Con, this armorer guy forced one of the girls in our booth to take one of his pieces and put it in our luggage, when I was not there. Months later, he contacted me all pissed off that we hadn’t photographed his stuff, when I had to go bust open the Comic Con boxes to even find out that we had it on hand. Basically, the show has its merits, and I should probably do more with it, but, on the overall, that last anecdote is illustrative: the show is more about business than culture, but it is so overwhelming that the business tends not to go terribly smoothly.

Most of the cons out here feel more like clocking in to work than visiting with members of my community. I really need to spend some more time going to the East Coast shows. Everyone, please hit me up with what conventions you are planning on attending in the coming year or two, ’cause I clearly need to make some plans. If all goes well, maybe I will have some new issue of BLT to give out. 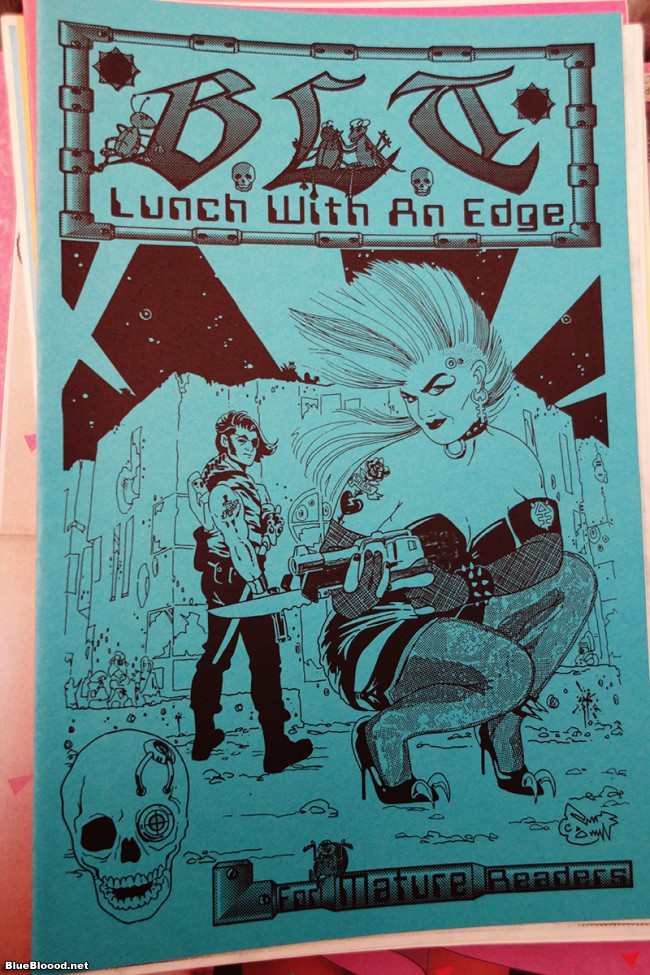 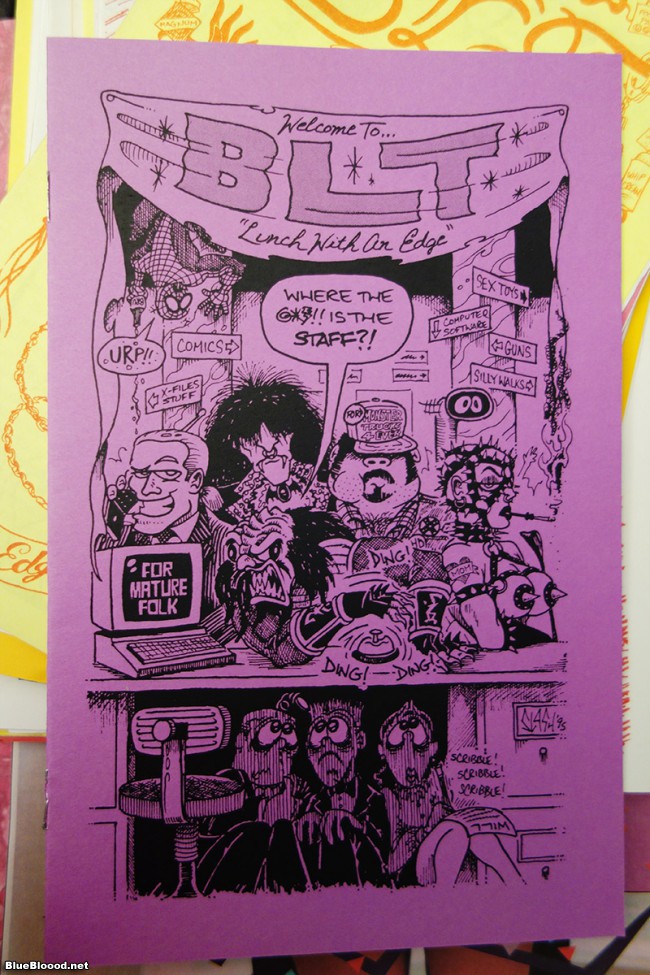 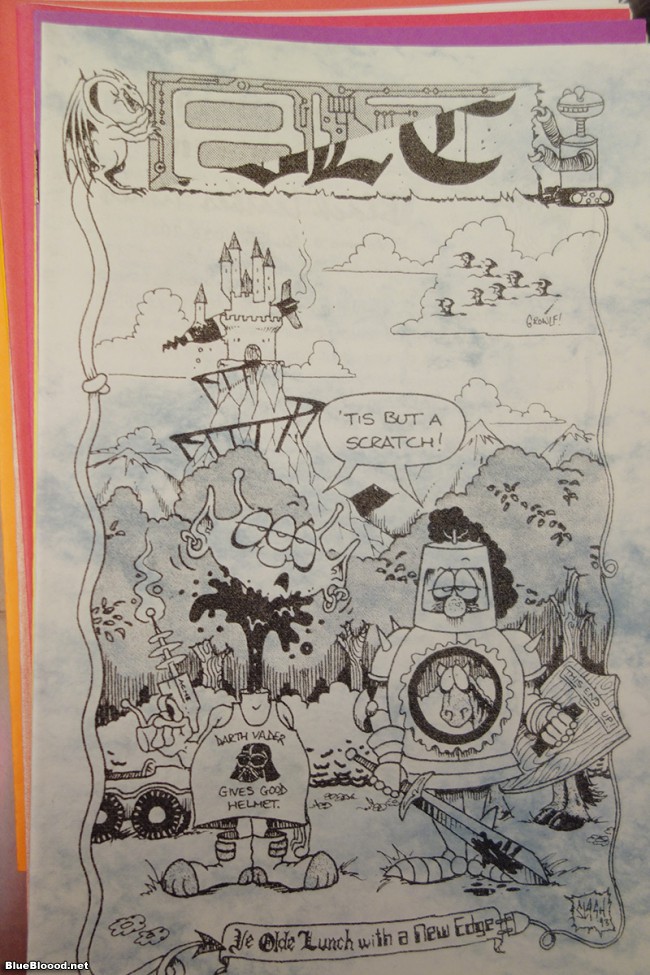