It is a million degrees and I am not at the Comic Con! 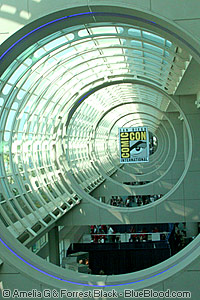 All I have to say is, “woot!” Well, really I’m going to say a bit more, but my cell phone and email have been blowing up with pals who assume I am at the San Diego Comic Con. But I am not and I am quite pleased that I am not. We had a lot of fun last year and I didn’t want to criticize in advance because I didn’t want responsibility for people deciding not to go, but . . .

The cons I initially loved were these amazing (at least for my teenage self) events. Authors and artists I looked up to would share their wisdom on panels during the day and hang out and socialize at night. There were masquerade balls for really doing it up, but lots of people, myself very much included, would run around in crazy costumes all weekend. There was a sense of fun and community and I met tons of new people every time. Occasionally, a convention hotel would give me less than stellar service for wearing (hypothetically) nothing but pins with clever sayings on them over my nipples or not peace-bonding my weapon. But there was always a chick in a corset and elf ears or a guy in painted black leather with a mohawk to agree with me that the hotel was totally unreasonable. Friends of mine who worked con security may recollect slightly differently, but only slightly. The important thing was that the events were extremely social. There was always a dealers room with unusual hard-to-find (especially pre-internet) wares. Eventually, I acquired a lot of items I treasure from exhibitors and BLT and Blue Blood both exhibited at many of those conventions, so I don’t object to a dealers room by any means.

But the San Diego Comic Con is just such a store. And it feels very stratified. I think part of the problem is that San Diego is so close to Los Angeles and comic book tie-in movies are hot at the moment. So Comic Con attracts various people who feel they are movie stars or big wig producers, who feel they should have a portable velvet rope between them and the great unwashed at all times. It is like there is this huge dichotomy between people who are trying to sell movies and people who are expected to empty their wallets. There is not even that much conversation between attendees or between guests. I think fandom should be more sociable and open and more about community than that. I live blocks from Whiskey Bar and similar haunts, if I want to have to go through a doorman. Frank Miller or Alan Moore could walk the Comic Con floor and go completely unnoticed. But Rob Zombie will bring a security detail and Steven Colbert will have a four hour line for people who want to get his autograph to sell on eBay. What actual fan wants to wait that long in the heat for a two second interaction?

Which brings me to the next reason I’m not crazy about the Comic Con. It feels like every year it gets a little bit more uncomfortable in the weather department. Maybe it is global warming. I don’t know. But last year was unbearable. It was insanely hot outside. It was impossible to park any place near the convention hall. After walking a long distance in the heat, there were huge crowds of sweaty people. Either the convention was too cheap to spring for properly air conditioning the hall or the San Diego Convention Center is simply not capable of properly cooling the building during the summer and that is why it is cheaper to rent it then. Needless to say, the weather, combined with lack of technology used to combat the discomfort caused by the weather, makes costuming less than thrilling. Additionally, all the snack stands had absurd lines and kept running out of basics like water. The convention discourages bringing in outside beverages, however. I was literally ill from dehydration at the end of the show and Scar and I both broke out from how generally scungy it was.

The show has gotten to an unwieldy size. The San Diego Gaslamp District is simply not big enough for it. Not only are hotel reservations difficult, but even finding a restaurant with food and a wait time of less than three hours is a challenge. The convention center actually sold out on the Saturday of the show last year and pre-sold out for that day this year. It makes sense that people only attend on Saturday because the event is essentially just a big store. Who would take a weekday off of work to go shopping, when they could just go on the weekend? And last year, although Comic Con supposedly frowns on this, a ton of vendors and exhibitors totally closed down and shipped out early on Sunday. This irritated me, partly because we stuck it out and partly because this meant there were booths I’d intended to see which were totally closed by the time I wandered by. There were a number of friends of mine at the show who I never saw, even when they stopped by the booth multiple times. Cell phone reception is not so good there either. And the sheer size is so overwhelming that we were all pretty frazzled when we did meet up.

So, don’t get me wrong; I had fun at Comic Con 37. It may have been mildly productive, although I’m better about contacting cool people I met at a show when I am less worn out getting home. But I am sitting at my desk now, with the central air going, drinking water, getting ready to post this article, and thinking “woot, woot, I’m not in the sweltering heat and I’m drinking water whenever I feel like it and life is good!”