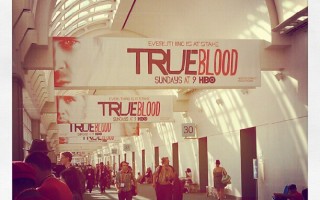 
Every year, I wonder if I should go either hang out and/or exhibit at Comic Con. Some years I do. Some years I don’t. HBO just retweeted an Instagram pic of the line for the True Blood event in Ballroom 20. SDCC is the most corporeal example of how the fandom which used to feel […]

Punch Robert – That Doesn’t Make You A Model


One of the oddest impacts of the internet is that being actually famous has become super unfun and being even a teeny bit internet famous can lead to a lot of the same headaches real famous people have — privacy invasion, unflattering paparazzi pics, strangers saying mean stuff — only without the resources actual successful […]

It is a million degrees and I am not at the Comic Con!


All I have to say is, “woot!” Well, really I’m going to say a bit more, but my cell phone and email have been blowing up with pals who assume I am at the San Diego Comic Con. But I am not and I am quite pleased that I am not. We had a lot […]


The Friday of the 2006 Comic Con, I only busted out my camera when really motivated because we’d gone on the Superhero and Supervillian-themed party bus the night before and, after a couple of days in the oppressive San Diego heat, I was slowing down. Still managed to shoot a nice little photo gallery for […]


As this year’s Comic Con looms near, it is time to take a look back at last year’s event. Looking at the gallery of snapshots from the Blue Blood crew’s Thursday at the show reminded me of some of the fun we had. I was excited to pick up entertaining stuff from Shannon Wheeler of […]


Universal’s Accepted Keg Party Photo Gallery Estimated opening weekend gross for Accepted is around $10 million, which is hunky-dorey for a movie with a production budget of only around $23 million. I don’t know what percentage of those movie-goers also attended Comic Con or talked to someone who did, but Accepted did the most brilliant […]