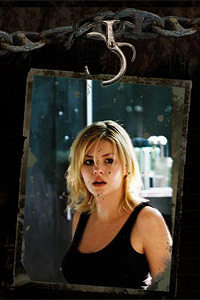 It’s kind of funny that I love love love the aesthetic of the new Captivity movie, yet I’m kinda not cool with the subject matter. I’m not too comfortable with it being censored either, though.

I know people have been complaining, since before I was born, about violence in movies being okay, while sexuality is censored. But I have to say, why is it that if someone puts their cock in a beautiful woman’s mouth, the movie is probably going to get an X and thus limited distro and thus limited financing and production values? But dismember the same woman slowly and the discussion becomes R or NC-17? Is it really okay to broadcast horrors, the likes of which most people will never ever see in person, to seventeen-year-olds, but healthy sexuality, of a sort most people will experience, takes another year of maturing for audiences to be able to handle it? What kind of a society are we going to have when we show teenagers torture porn like Hostel before we let them see, if you can forgive me for invoking normalcy, normal sex?

Full disclosure: Obviously, you all can’t have missed the advertisements Captivity bought on a number sites I work on, including this one. And, yes, if you went to the premiere party at Los Angeles meat market Privilege, you probably spotted around half a dozen hotties you recognized from BlueBlood.com, along with various other contributors.

It bums me out, on a number of levels, that the premiere party was billed as ground-breakingly outrageous and nasty. This seems to show a simultaneous lack of respect for the performers and desire to profit from them. Although the cigarette smoke-stained off-white interior of Privilege generally plays host to more vanilla smutsters, Los Angeles has seen tattooed hotties doing BDSM once or twice before. In point of fact, the club is essentially a tent erected by where the Coconut Teazer nightclub used to stand. So that very location has probably been host to more than its share of tattooed hotties with fetish gear over the years. The most ground-breaking aspect was probably that it is unusual for a movie to not screen at its own premiere.

Anyway, both the MPAA, which rates movies, and a variety of watchdog groups have objected to Captivity’s presentation well before they started planning a premiere. After Dark Films pulled thirty of their billboards from Los Angeles and more than fourteen hundred taxi cab adverts, the creative for which featured the slogan “Capture, Confinement, Torture, Termination.” over very beautiful stylized photos of a very small portion of a scene involving a woman. I can’t emphasize enough how great the color scheme of those advertisements was. Meanwhile, the MPAA jerked the movie company around on when the film was even going to be rated. After Dark Films co-founder Courtney Solomon claims the MPAA rigmarole with Captivity is just about the MPAA maintaining their position of power. “They needed a whipping boy. They’re not about protecting parents or kids. They’re about keeping their power in Hollywood.” The upshot of this was that a schedule May 18 release date became a July 13 release date. While releasing a horror flick on Friday the 13th is always nifty, any organization which can keep audiences away from a product is scary. And not scary in an entertaining way, scary in a bad way.

A quick history lesson: The Motion Picture Association of America was founded in 1922 as a trade association. Although the initial industry concerns it dealt with had more to do with copyright and contract standardization, over the years, it has become almost synonymous with the ratings system it devised. Many industries choose to police themselves, partly out of decency, and partly out of a desire to take care of it internally before outsiders do it for them. So the MPAA ratings board determines whether a movie will receive wide release as a PG flick or the financial death knell of an NC-17. Representatives of the six major studios sit on the board. These studios includes Disney, Fox, Paramount, Sony, Universal, and Warner Brothers.

Now, the opening weekend gross for Captivity was only a bit over a million bucks, which is pretty terrible for a major studio release and brought the movie in at a ranking of #12 for domestic releases that weekend. In all fairness, the flicks Captivity was beaten out by were Harry Potter and the Order of the Phoenix, Transformers, Ratatouille, Live Free or Die Hard, License to Wed, 1408, Evan Almighty, Knocked Up, Sicko, Ocean’s Thirteen, and Fantastic Four: Rise of the Silver Surfer. Had the movie been able to open as planned, if the MPAA had not hung them up, then it might have been able to do better against the movies opening that weekend. Although a $1.4 mill opening is lackluster for any theatrical release, especially a heavily advertised one, had Captivity opened May 18 with the same total, it would have ranked #8. Then again, maybe it would have gotten its ass kicked by Shrek and Spider-Man, just like everybody else.

Part of the difficulty I have parsing out my feelings on the brouhaha is that it is difficult to figure out whether an After Dark Films release counts as a major motion picture or a plucky little guy trying to make it. Captivity is “co-released” by Lionsgate, but Lionsgate leaves all the responsibility for potentially problematic promo on After Dark’s doorstep. I’m not sure what “co-releasing” means exactly, but Lionsgate has a market capitalization of one point three five billion dollars and an estimated four hundred full time employees. Which I would not categorize as small or independent. I think it is important to note that the distro on a partner-produced movie like Captivity is a microscopic portion of the business of a behemoth like Lionsgate, which is responsible for very enjoyable and successful projects such as the Academy-award-nominated The Cooler and innovative DVD packaging and distribution for projects ranging from cutting edge fare like Weeds to cult classics like King of New York. Then again, if you inflicted the Care Bears movie on your kids, that is partly Lionsgate’s responsibility too.

According to the New York Times, Courtney Solomon, who put himself on the map by optioning Dungeons & Dragons and parlaying that into a much-lambasted directorial turn, “persuaded the director of Captivity, Roland Joffé, the much-honored filmmaker behind The Mission and The Killing Fields, to undertake reshoots. These added explicit torture, including a so-called “milkshake” scene that involves body parts and a blender, to a picture that was largely psychological in its thrust when After Dark acquired the rights to it.” Both to the New York Times and in other media outlet, Solomon chortles about what a freakshow his premiere is going to be and how upset he hopes women’s groups get about his movie. The National Organization for Women said, on the record, that they were not going to protest to give him press.

So, having delved into the issues involved, here is my summary take on it. First, if After Dark Films is looking for a modern audience for their movies, it is a bit antiquated to act like BDSM and tattoos are outrageous fringe culture. I’m sick of this sort of marginalizing nonsense from people who would like to make a dollar off of my scene. Secondly, because of the major studio makeup of the MPAA, I feel it can’t really be objective. I like having ratings on things as a viewing guide, but I dislike the way the ratings system leads to unwarranted limitations on distribution and I particularly dislike the way the current rating system encourages violence against women in place of human sexuality. It will be a chilly day in Hellywood before I deliberately view torture porn like Captivity, but I don’t think a project like that should have its success determined by whether or not its producers can convince a half dozen really biased businesspeople that violence against women is appropriate viewing for teens. Thirdly, although I kind of liked the Captivity billboards, I was personally revolted by the Saw signage at the San Diego Comic Con and I think movie producers, and everyone really, should pay attention to what they put in an advertisement people will not be able to avoid. I do not want strangers telling me what I can see in my media. I deeply believe that that becomes a slippery slope to total destruction of the free speech rights granted to all Americans by the First Amendment, but I also do not want strangers forcing me, or forcing children, to see things they do not wish to see or should not see. This means that adverts, in public places, for potentially upsetting products, should be honest about what the products are, without ramming the product down the throats of the unwilling.

I admit that, although I loved Elisha Cuthbert’s performance and character in the surprisingly awesome The Girl Next Door, I loathed her Kim Bauer character she played on 24. I thought about kicking off this article with a joke about how I thought Kiefer Sutherland’s Jack Bauer should have just let her be kept captive and tortured. Heck, that was probably the inspiration for Captivity. For me to want to watch that, however, it would really have to be one of the dungeons on Fucking Machines, where the action is consensual and female pleasure might actually be involved too.