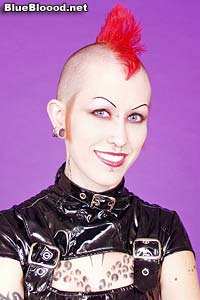 A while back, we were chatting in the forums about horror movies and gore on film. It occurred to me that outspoken Blue Blood superstar hottie Jax, with her extensive body modifications, would have a very interesting and unique perspective on subjecting the human body to extremes. Definitely a topic which called for an in-depth interview with Jax!

Amelia G: What are some of your favorite horror movies or other media?

Jax: I grew up on the oldies like Nightmare on Elm Street, Texas Chainsaw Massacre and Halloween movies, I remember watching them with my dad when I was really young so I’ll always hold those as some of my favorites. I really, really like almost anything done by Takashi Mike.

Amelia G: What are some of your favorite real gore movies or other media?

Jax: My most favorite real gore are the Faces/Traces of Death series and the movie Cannibal Holocaust (thanks TOA for showing me that real gore movies are out there).

Amelia G: Do you find gore in horror movies scary?

Jax: Scary? Not really. Sometimes some things will make my toes curl, because I have an overactive imagination. But that’s because I’m thinking “Woah, what would that feel like?” or “Yeah, I remember when I did that, and it didn’t feel very pleasant.”

Amelia G: I think a lot of people would be freaked out by seeing someone hung off a hook or someone getting their tongue split or a hole punched out of someone’s flesh in a movie torture scene. Obviously, you have an intriguing and different perspective from the average person because you know what all those things would actually feel like. Do you think that your real life experiences make movie scenes more visceral for you or more ho hum or just more interesting?

Jax: I’d have to say more interesting mainly, but only because of other people’s perspectives. While I’ve actually felt what it was like to hang from hooks, punch holes in my ears, get my tongue split or any other sort of more extreme body modification, it’s interesting to see other people’s reaction to them on the TV. Like recently, my mom watched Strangeland, and was freaking out over some of the suspension scenes, knowing full well I have done multiple suspensions. The difference is she watched them on TV but wouldn’t look at the pictures of me doing them, haha. I think maybe if she saw pictures of me doing them, it would have become a little more realistic, I dunno.

However some scenes are more visceral for me. Seeing it and actually being able to relate to those feelings is almost odd in a way that sometimes those feelings will rush back to me. Almost as if I’m participating again. 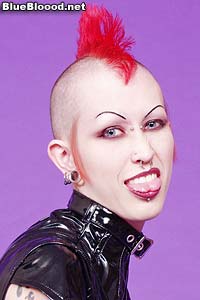 Amelia G: Do you think the context of, for example, a consensual one hook suspension is so different from something forced on someone unwilling that the experiences are not really comparable? Does the manner in which something like that is done entirely change how an individual would experience it i.e. what aspects do you feel would make an experience like that more uplifting vs. more like torture?

Jax: Being forced and being willing I feel are two entirely different experiences. For example, when you willingly do a one hook suspension, it is because you want to experience the pain, the emotion and the overall sense of what is going on. I can’t imagine being forced to do a suspension. Your mind is just not in the right place to get the full aspect of what is about to happen. For anything to be an uplifting experience, you have to want to do it. You have to be curious, not repulsed, by the act in certain situations. I feel in these situations, torture is any physical or emotional pain that you are not willing to be consensual to, and is being forced upon you. Some people feel that suspensions, tattoos, piercings or any other body mod is performing torture and mutilation upon ones self. I completely disagree, because these are things I want to feel and experience as far as the mindset. In order for it to be uplifting, the number one thing (I feel) is you have to be comfortable.

Amelia G: Some people enjoy going to the gym and some people just like how working out makes them feel or look. To what extent have you enjoyed the process of getting each of your varied body modifications and to what extent was the ends of having them more enjoyable for you personally than the means of acquiring them?

Jax: If going to the gym and working out makes you feel or look great, then kudos to you. I respect your decision to do so, as I would hope those would respect my decisions for my body mods. The biggest thing I really enjoy about the process of getting new mods is the planning that goes into each one. While my piercings dont really have any sort of meaning other than I like the way they look, each and every one of my tattoos has meaning. And I have to say, through all the years the most enjoyable thing about having what I have is being able to look back and remember each and every detail about my life at the time I had them done. Almost like a picture album. Where I was, my thoughts on life, and my innermost feelings are things that could never be captured with a camera.

And I have to admit, the endorphin rush and the feeling of overcoming pain once its over is pretty attractive to me in itself regardless of the mod. No, I’ve never orgasmed while getting a body mod, the feelings of accomplishment and the love I have with the finished result is much more powerful.

Posted by Amelia G on December 18, 2008. Filed under Blue Blood. You can follow any responses to this entry through the RSS 2.0. You can leave a response or trackback to this entry
Tags: body-art, body-modifications, gore, halloween, horror, horror-movies, horror_movie, jax, nightmare, pain, piercings, tattoos, tongue-split, torture-porn