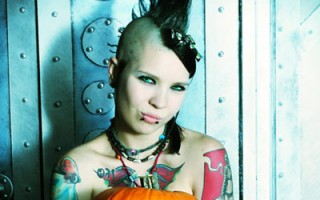 
Ron Royster, of Eroticist Films, just directed a music video for a song called Drowned Out, by Crystal Bright and the Silver Hands. The video came out today, in time for Halloween. Crystal Bright is an artist who works in a number of media. Ron Royster captured her band’s eclectic vibe nicely with a Transylvanian […]


Happy Halloween, everyone! Razor Candi and photographer Bodó Janos Attila did Halloween up nicely for the Blue Blood VIP this year. VIP members get to enjoy the whole shoot, but we also have a free deathrock Halloween photo gallery right here.

Sexy Lincoln, Frog, What is your Halloween Costume?


I’m kinda working on an article about sexy Halloween costumes. But I’m also cooking pizza right now. So, for today, I’m just going to post one of the best Halloween spoof videos ever posted to the internet. When I popped over to College Humor, I was amused that a search for “sexy lincoln” yielded quite […]

- by Amelia G in Art, Personalities


The very talented Chad Savage has done artwork for various Blue Blood projects over the years. He is a master of Halloween projects in specific. This month, he is offering a limited edition art print of Never Bury a Corpse in a Pumpkin Patch. Even if you can’t go shopping for jack o’lantern finery in […]