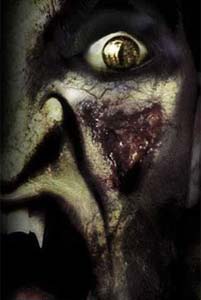 What originally happened to H.R. Giger’s initial conceptual designs for the “face-hugger” creature in the 1979 film “Alien?” If you know that the answer is that they were seized by U.S. Customs, then you should head over to the Halloween Catalog Trivia challenge and use your horror trivia brilliance to unlock the fun special video footage.

I always felt like H. R. Giger just knew how to make really great-looking alien monster people-eater terrifying kind of art. He has fallen afoul of the law a lot though. Most Blue Blood readers probably know that H. R. Geiger’s artwork was the center of the controversy over distribution of The Dead Kennedys’ album Frankenchrist.

Everyone ready for Halloween?

Posted by Raven Nothing on October 25, 2008. Filed under Blue Blood. You can follow any responses to this entry through the RSS 2.0. You can leave a response or trackback to this entry
Tags: alien, controversy, dead-kennedys, h-r-giger, halloween, horror, horror_movie, horror_movies, jeepers-creepers, monster