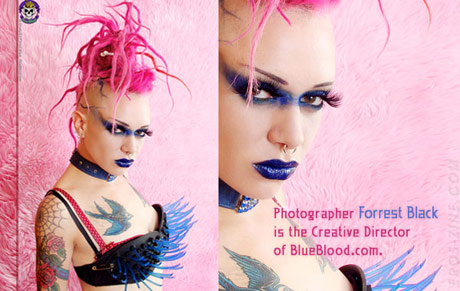 “Forrest Black is best known as the Creative Director of Blue Blood, a network of sites that showcases gorgeous chicks in explicit gothic, punk, well-armed and counterculture erotica. More recently, Blue Blood has launched BlueBlood.net, a source for community where freaks of many stripes can post on everything from politics to music to sex to travel.

Born into a hippie household in Northern California, he’s lived since in the DC area and Atlanta, and now lives and works in Hollyweird, where he hits the cool parties and meets some of the world’s freakiest and hottest chicks to pose for him and Amelia G. We caught up with Forrest at the recent West Hollywood Book Fair for a chat about the Hells Angels and well-armed women.”

The interview kicks off with:

Eros Zine: OK, let’s go way back to the beginning: Where did you grow up — and how do you think it influenced your choice of career, and your attitude toward the industry?

Forrest Black: I was born in Northern California, in a room full of candles, incense, and revolutionaries. It was in a beautiful home with thirteen black cats and the ghost of the previous owner. The property had previously been a boys camp which had been converted by my parents into the sort of hub of my Father’s business. He was the leader and sort of project manager of what was later described as one of the largest drug smuggling operations of the time. They had planes and trucks crossing borders North, West, East and South. Among many other things, he was a major supplier of Ergot to the famous LSD houses of psychedelic era San Francisco, and he believed in what he was doing on a profoundly spiritual level. My Mother was a model and an artist and is one of the most beautiful loving people the world could ever know. So, I kind of grew up with radicals, revolutionaries, and rock stars. We were very close friends with the Grateful Dead and one of my earliest memories was going to the Oakland Cow Palace with several busses chartered by the Hells Angels to go see the Barnum and Bailey Circus. I went to kindergarten with a Free Sonny Barger shirt on.

Growing up surrounded by all that clearly instilled a certain libertine perspective and appreciation for counterculture philosophy, art, and politics that is so deeply ingrained in me, I can’t imagine who I would be without it. Blue Blood was never really a career choice for me, it’s deeper than that. So, some of the trends in adult industry to use some of the labels and terminology of current counterculture in their bid for a certain cool credibility or whatever can occasionally get under my skin, but I am aware that it’s not something that needs to be taken too seriously.

Forrest Black: Some of the original objective with Blue Blood was to celebrate all the things that were good and beautiful and enjoyable and meaningful from within the context of a counterculture lifestyle. The various scenes we were involved in, or had visibility to, and in many cases grew up with, were full of interesting eclectic creative people, none of whom were textbook examples of one narrow cultural buzzword or another. But there was a certain commonality of experience and perspective, and we felt like we understood it well enough to create a publication that seemed to color outside the lines but made perfect sense to the right kind of people and quickly became a powerful tastemaker across the board.

Casting that wide a net, collecting up the coolest gems from the worlds of music, literature, street fashion, gaming, art, and pop culture, with an eye to expressing what was good and sharing what was quality with our audience has always been an immense undertaking. In some ways the internet has helped and in some ways it’s been a bit of a challenge. I love being able to run as many pictures as I like from a great photo shoot, no longer being limited by page count and format constraints. I can even post video to compliment the layout as well. But, on the entertainment writing side, it’s possible to become so micro-niche specific these days that it becomes very difficult to know sort of what level to stay at. For example, what once was an entertaining little 150 word bit on a certain industrial fetish esthetic now has seven to ten active blogs and communities dedicated to just that.

To deal with transitioning to the sort of unlimited depth of the internet format, Blue Blood has kind of gone two directions online. On the one hand, like you mentioned, we have a lot of sites, each of which has it’s own more specific focus. While on the other hand, the central sites, like BlueBlood.net are in many ways more focused on sharing the essential unifying ideas of our counterculture as well as building a community of mature diversely opinionated free thinkers.

Eros Zine: How did you get involved with Blue Blood the print magazine? How early in the life of the mag was it? Were you involved with its predecessor BLT? . . .

You all will just have to pop over to Eros Zine to read the whole thing. It is a really extensive and interesting interview. It takes a talent like Thomas Roche’s to get Forrest Black really talking, but he has a lot of interesting things to say. There is also a photo gallery of some of Forrest Black’s and my photography. Be sure to click on the header graphic when you get to Eros Zine, in order to see the whole thing. Blue Blood hotties featured in the sexy spread include, in alphabetical order, Dana DeArmond, Darenzia, Eva Klench, Jax, Justine Joli, Kellie LaPlegua, Michelle Aston, Miso, Miss Conduct, Nikki Vega, Roxy Contin, Sara X, Scar 13, Stephanie Slaughter, Sun Karma, Superna, Verotika, Vima, and Voltaire. Please check it all out. Thanks so much for the support, Eros Zine and Thomas!

Posted by Amelia G on October 19, 2007. Filed under Blue Blood. You can follow any responses to this entry through the RSS 2.0. You can leave a response or trackback to this entry
Tags: blt, Blue Blood, blue blood, blue-blood-hotties-around-the-web, BlueBlood.com, blue_blood, eros_zine, forrest black, forrestblack, interview, thomas_roche, thomas_s_roche