Is there anything Uncountry about Jason Miller?

I went to high school overseas, mostly with other children of diplomats and with the children of career military folks. And, some time after college, I ended up in the DC area, partly because my mother had been temporarily stationed Stateside. A funny thing about the Virgina and Maryland suburbs of Washington, DC is that they are an odd combination of global sophistication and, for want of a better term, redneck or country. A number of my high schools were kind of like the ones in Maryland and Northern Virginia, as that is where children like me tend to go when their parents are stationed in the USA.

Blue Blood readers may be familiar with Jason Charles Miller fronting the goth-industrial band Godhead, who Forrest Black and I worked with and reported on many times. But, as Jason says in the video for Uncountry, he has been doing country music for a while now.

The song Uncountry is fucking awesome and definitely resonates with my personal experience. Blue Blood is very much about not allowing others to put you in a box or limit your options because you like black clothing or some such. One of the aspects of having moved around so much as a kid, which I really value, is that it gave me a certain perspective. Because I didn’t have one subculture or another particularly deeply ingrained to any sort of a groupthink level, I saw the common threads between my disaffected friends who listened to Lynyrd Skynyrd and my disaffected friends who listened to Bauhaus.

It would be easy to get a debate going over whether almost anyone from the DC burbs is uncountry in some fashion or not, with plausible points on both sides. Sometimes, late at night, when no one else is around, I like to watch CMT music videos. And I did play Dungeons & Dragons, while listening to Rush and AC/DC, as a teenager. So feel free to factor all that in when I say Uncountry is a great track and the video works to get the point of the song across.

CAST:
Jason Charles Miller as Himself
Curtiss Frisle as The Manager’s Assistant
Grant Imahara as Himself
William Kessler as The Attorney
Angie Savage as The Groupie/The Cheerleader
Buddy, Cooper, and Karma as The Poker Playing Dogs
And Robert Picardo as The Manager

I sweat and bleed for every dollar that I earn
I always break my back, and I never break my word
If you take a good look I bet you’d see
There ain’t nothing uncountry about me

To see me up here on this stage you might not believe
That I cut my teeth on ‘Country Roads’ and ‘The Fightin’ Side of Me’
Now I’m no stranger to the pain that a hard day’s work will bring you
And ask me where I got these scars, I’ll be more than glad to sing you
My song of sad regret

I sweat and bleed for every dollar that I earn
I always break my back, and I never break my word
If you take a good look I bet you’d see
There ain’t nothing uncountry about me 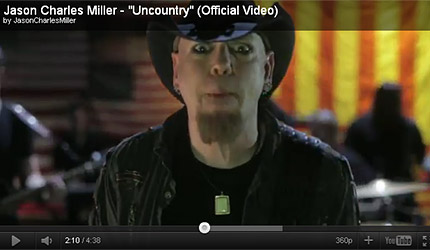 Posted by Amelia G on September 4, 2011. Filed under Headline, Music, Video. You can follow any responses to this entry through the RSS 2.0. You can leave a response or trackback to this entry
Tags: cmt, godhead, jason charles miller, jason miller, uncountry