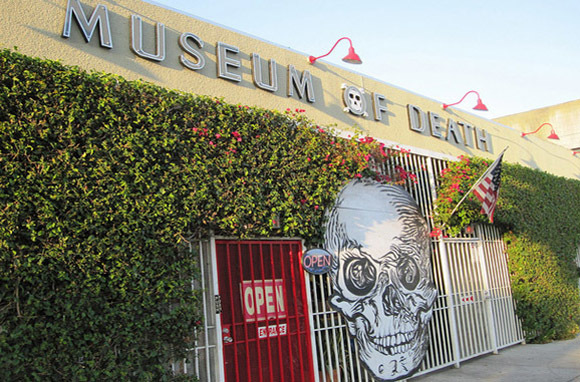 The Museum of Death, Hollywood, California

Sunny California just too bright and cheerful for you? Respite awaits you in the Museum of Death, which boasts the world’s largest collection of artwork by serial murderers (don’t forget to stop by the gift shop for postcards!), videos of autopsies and deaths, and photos of the Charles Manson crime scenes.

“There is not an age limit for the Museum of Death because we all die, but we strongly recommend mature audiences,” warns the museum’s website.”There have been a number of falling-down ovations (people passing out) at the museum (mostly men), so we stress being prepared for a good dose of reality!” Hmm, We All Die sounds like a fantastic title for a children’s book …

Posted by Amelia G on September 5, 2012. Filed under Art, Headline, Oddities, Sex. You can follow any responses to this entry through the RSS 2.0. You can leave a response or trackback to this entry
Tags: creepy, museum of death, penis in a jar, travel, ventriloquism