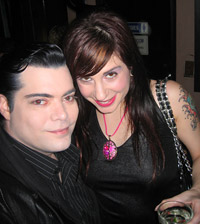 I think it’s unfortunate that one of the down sides of living in pretty much any interesting area or city is that, if you are there long enough, the notion that it just isn’t as cool and fun as it used to be is nearly inescapable. It’s really difficult not to fall into a bit of a rut when you see stores you used to enjoy close down, clubs you used to have a great time at are gone, friends that used to be the life of the party have settled down or just become such monumental losers that you don’t want to see them anyway. It’s hard not to feel like you should just uproot yourself and move to greener pastures sometimes. I know I’ve felt like that in a number of areas I’ve lived. Lately, a lot of my Los Angeles friends have been sharing their general ennui on this subject as well. So, I thought I might share one technique that I’ve found that can kind of help shake things up a little. Just pretend you are visiting. Give yourself a week to do all those things you’d only do if you were actually from out of town. Read the local weekly paper and actually go to everything that piques your interest. You’ll be surprised at just how much fun is actually going on right around you.

Just the other day I was feeling kinda bleh and decided I better just get off my butt and take a walk around my own neighborhood and I ended up having a really fun time. Stopped by the Frolic Room on Hollywood Blvd. and had a beer with their usual crazy assortment of odd characters. Wandered over to the notoriously crusty gay hangout that is the The Spotlight Lounge over on Cahuenga to check out Joanna Angel’s Porny Monster release party. Ran into a ton of people I know but wasn’t really expecting to see. James St James, Author of Disco Bloodbath/Party Monster: A Fabulous But True Tale of Murder in Clubland, was there too, so that was cool. Then I wandered down to Sunset and Vine(ish) to check out Cardinal Sin’s new Dark Pink club. Had a really pleasant time there, met some really cool people. Had a suprisingly interesting conversation about leisurely scenic walks in the World of Warcraft with a couple of nurses while getting to enjoy Wednesday and Darkfiend spinning some of my favorite music. Stumbled home in the wee hours.

Now, obviously, not everybody lives in my neighborhood, but the point is that there actually are more interesting things going on around you than you probably realize, and sometimes it really pays off to just stop by some bar you’ve never been inside, go see a band you’ve never heard of, take a fish printing seminar at the local museum. Amelia has a really cool collage on the theme of government’s inherant indifference to the plight of man that she did not long ago over at the Getty. There is a lot to do, so treat yourself to a kind of random sample from time to time. It’s totally worth it.