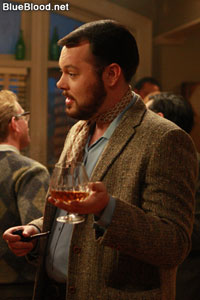 In this week’s episode of AMC’s Mad Men, the Paul Kinsey character, ably played by Michael Gladis, throws a party in his hipster Montclair loft. I’m not sure what Montclair is like today, but, when I was in school in Connecticut, I recall Montclair being mostly nice suburban homes. Definitely no longer hip and outlying. In the 1962 time of Mad Men, however, it is a transitional neighborhood which is home to its original have-nots and the adventurous vanguard of hipsters who are the frontline shock troops in any gentrification.

Paul Kinsey has invited people from all different areas of his life, hoping they will mingle with one another happily, and think better of him for throwing such a fabulous interesting party. It is a bit scandalous that, as an aspiring writer, Paul has snarfed a typewriter from work and left it on display where his guests can all see it. Some of the people from the Sterling-Cooper advertising office where he works feel uncomfortable, uneasy and unsafe in his neighborhood. Some just feel threatened by the strangeness and feel compelled to assert their alleged superiority. Paul’s ex-girlfriend, the sexually predatory office manager Joan Holloway, refuses to acknowledge that his new girlfriend is an assistant manager at a supermarket, calls her a checkout girl, makes a thing of her being black, and accuses Paul of basically trying to hard to be interesting. One of Paul’s collegiate chums fails to close the Peggy Olson character because he can’t wrap his head around the notion that a woman is a copywriter like his friend and not a secretary or receptionist. It is a very satisfying moment when she tells him that she is not going home with him because she is in the persuasion business and his presentation was unimpressive.

Damn but I have had that party. I always want to meld all the areas of my life into one. I don’t want to have to present a different face to each group of people I know. I want everyone to know the true me and somehow this feels like it means that everyone I know should be able to enjoy one another as much as I enjoy each of them.

I invited many of my friends from university and from the science fiction convention circuit to shindigs at my old punk rock group house Cambodia. Some of my school friends thought it was a great opportunity to bang a piece of strange, but they would also talk amongst themselves about what a waste it was that I was doing this instead of working for a management consulting firm or investment bank or something. Some of my punk rock friends failed to bang a piece of what would have been strange for them because it never occurred to them that someone in a buttoned down shirt could, for example, be gay. I still cringe when I remember one of my favorite people from sf fandom telling me he had the single worst time he had ever had at any party ever at Cambodia.

I thought that putting the different groups of people together would expand their horizons in an enjoyable way. My university prided itself on its diversity and I believed that diversity was simply good. Sometimes, for some people, my cross-pollinating shindigs did work out the way I hoped and intended. Writer Malcolm Gladwell, author of The Tipping Point, calls people like me connectors for introducing those who might otherwise not meet. Sometimes it is stimulating and invigorating being a connector and sometimes not so much. I try to make Blue Blood an entertainment haven for people like myself, who have wandered through many subcultures, never finding just one which was wholly who they are. Living that way, a person is likely to avoid believing the common lies people tell themselves, a person is likely to avoid believing things which are simply not true. There is a purity to this, but there is also the very real possibility of ending up feeling like a person without a country.

Posted by Amelia G on August 7, 2008. Filed under Blue Blood. You can follow any responses to this entry through the RSS 2.0. You can leave a response or trackback to this entry
Tags: advertising, amc, cambodia, hipster, hipsters, mad men, malcolm-gladwell, matthew-weiner, michael-gladis, party, shindig, television, the-tipping-point