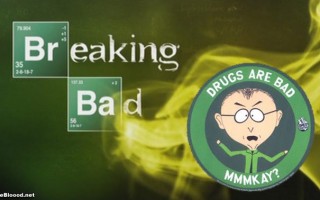 
I wish I were watching Breaking Bad on my computer, the way I do a lot of HBO and Cinemax stuff. Because I want to share screencaps of the two most fantabulous moments of tonight’s show. They involve expensive women’s footwear and stacks of paper. So, when last we left our heroes, Walt had told […]


Tonight’s episode of Immortalized is the season finale. It’s been on my DVR for two weeks, much to my bafflement, and I’m sure this says everything we need to know about the show’s chances of a second season. You don’t randomly broadcast the finale out of sequence on a Monday if you think anyone is […]


This week’s Immortalized begins with a load of crazed, sweaty bombast from Zach Selwyn, whose hands trace ever more complex glyphs of desperation. Our challenger? Erich Carter, whose clients include A-list celebrities, and whose patter sounds coached. This is more apparent after hearing him tell Zach about his childhood spent rejecting wholesome pursuits and sticking […]


This week’s episode of Immortalized begins with a jittering Zach Selwyn promising to bring us the “ultimate death match”. It’s finally come clear to him that the reason for his bizarre captivity is the same reason no one ever mentions prizes, and the reason for the “no endangered species” line in the pre-match pep talk. […]


Welcome to the fourth and final gimme episode of Immortalized, a show that I am going to start treating as a hostile entity if it does not improve after we presumably meet the fourth member of the home team. Host Zach Selwyn starts out punchy this week, and his gestures betray that he has slid […]


We’re back with episode 3 of Immortalized, and Zach Selwyn’s unkempt hair and glazed eyes speak of a man who despairs of ever escaping his captivity. This week’s challenger is a 32-year taxidermy veteran who apparently thinks dressing like a beach bartender makes him an outlaw. Meet Mike “Mac” McCulloch and his A game. Mike […]