You know that ex-girlfriend who you were starting a business with? The one you left because you knocked up some mean blonde waitress you met at a diner? Yeah, well she will get on Charlie Rose with her husband (also your former business partner) and say that the “sweet brilliant man” she once knew is dead. That will hurt your feelings, mmmkay. (Skyler and Marie are so awful that the one character who had previously kept me from thinking this show was misogynist was the Gray Matter founder and now Breaking Bad ruined that too. Women are not all weak, judgemental, and venal in real life, just on Breaking Bad.)

As an artist, one always struggles with the impact of what one creates. If your work has no impact on the viewer, you are wasting your time and theirs. But you don’t want to be responsible for somebody else making bad life choices. Okay, if somebody is going to deal meth because they saw it on a television show, they are probably not someone who makes great life choices anyway. If somebody is going to do drugs because they saw it on TV, is that the fault of the show creator? I think artists walk a bit of a tightrope on these things. I guess Vince Gilligan (or some upper level mucky muck at AMC) was having trouble sleeping at night. Because the final episodes of Breaking Bad — a show which practically set the bar for what television could be — are just not well-done, but they do communicate that it is a bad idea to get into the illegal drugs business.

Peter Gould, the writer and director of tonight’s episode, claims Troma and punk rock cred in his IMDB bio. (Not that he has any Troma credits listed.) Also, Peter Gould apparently made an award-winning foot fetish video at USC. Sounds like the sort of person I would normally think was 114 kinds of awesome, but tonight’s episode wasn’t just failing to be Breaking Bad level great, it was sloppy. (I say 114 because there are purportedly 118 elements in the periodic table, but 4 are unconfirmed to date.)

Walter White has $10 million dollars. Yet he inexplicably has a vacuum cleaner salesman made him a fake ID and then drive him to New Hampshire in the back of a truck. Why would he let the only person who knows his new identity know where he is? Morons know not to do that and Walter White is supposedly a genius. The guy has that much money on hand and we are supposed to believe he couldn’t find a rental online without help, maybe a rental which came with utilities like satellite television and internet? Even though he is right on the Mexican border already. A fake ID which costs tens of thousands of dollars seems like something the man could travel on. Also, you know where you do not effing go if you have lung cancer? Somewhere cold and wet.

I could go over a long list of enormous plot holes, but there is really no point. The astroturfers are out in force on this show. This time tomorrow, lots of people will be repeating the same PR bullet points about how this was one of the best episodes and Walt is a monster and blah blah blah. Also, this episode had to spell out that Walt was trying to help Skyler when he made that threatening phone call last week, when he knew the police were listening. Apparently, too many people watching the show thought his actual purpose in “kidnapping” Holly for like 20 minutes was to “teach his wife a lesson”. I’m trying to avoid calling anyone stupid here, but it is challenging. I don’t know if all the fake hoopla over last week’s pedestrian episode was to press for an Emmy or to assist the war on drugs, but it was lame and painfully phoney.

I loved Breaking Bad. I thought it was one of the best shows ever created. I think becoming a drug kingpin is a terrible miserable ill-advised career choice because that stuff never ends well. Never. But the way AMC is winding down Breaking Bad is a crying shame. I am so so so disappointed. I expected the show to go out in a way which made me sad. I expected tragedy. But I did not expect the show to go out implausible and misogynist. 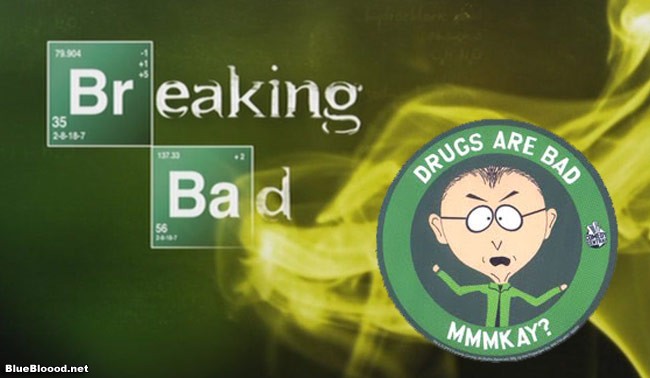