Okay, this could easily be one more thing destroying pop culture touchstones of my childhood. Like that Star Wars sequel with Jar Jar Binks and cutesy young Darth Vader or whoever etc. (I’d like to point out that I somewhat presciently said at the time that it looked like George Lucas was trying to get a fucking Disney franchise. But I digress.)

SLC Punk is one of my favorite movies of all time. I think it speaks to my punk experience in a way which resonates more deeply than any other film I have ever seen. Yes, I am counting Suburbia and Repo Man. Writer/Director James Merendino is doing an Indie Go Go for a sequel to SLC Punk, called SLC Punk 2: Punk’s Dead. I’d like to give him more dough, but I don’t think I can wear a T-shirt which says either “Punk’s Dead” or “Don’t be a sellout, buy in.” I wouldn’t even wear a shirt which said “Don’t be a sellout; buy in.” with the correct semi-colon punctuation in the slogan. But, still, SLC Punk is such a good film. I’m going to be an optimistic. The ground floor pledge gets you the movie and the option to attend the big punk show they are throwing for one of the scenes in the movie. If you happen to be in Salt Lake at the time. I do know a surprisingly large number of people in Salt Lake City, Utah, for never having been there. So maybe this will provide an excuse for me to visit.

Anyway, Forrest Black and I spoke at a Collaboration magazine publishing event tonight and one of the other panelists mentioned that this had hit Indie Go Go. So I thought I’d share too. Only a day left to pledge.

Why do I just know that I have some howlingly appalling punctuation errors in this post, writing it at one o’clock in the morning, and having made semi-colon commentary? 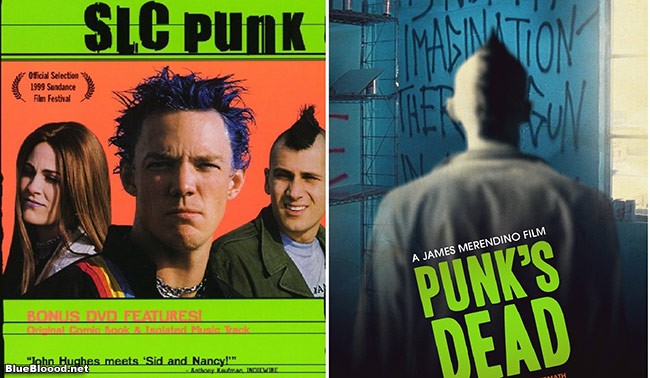 Posted by Amelia G on December 11, 2013. Filed under Art, Headline, Music, Personalities. You can follow any responses to this entry through the RSS 2.0. You can leave a response or trackback to this entry
Tags: collaboration, crowdfunding, disney, george-lucas, indiegogo, james merendino, punk, punks dead, slc punk, star wars, t-shirt