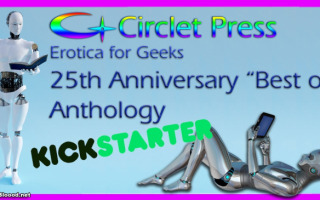 
I’m excited that I had Cecilia Tan’s Kickstarter book project up on my screen when I went to run some errands, planning to write it up when I returned. It just got funded in the past hour! On Kickstarter, the creative person doing the project only gets any of the funding if the project hits […]

May 14, 2012 | Filed under Books,Headline,Personalities | Read More

Backstage Passes: An Anthology of Rock and Roll Erotica from the Pages of Blue Blood


Sorry I haven’t updated in a few days. I was scheduled to announce the release of my fabulous anthology Backstage Passes on Monday. But I was wracked with anxiety and inappropriate affect, so, instead of feeling celebratory about the awesomeness, I just mostly felt nervous and queasy. Excited contributors have all been emailing me for […]