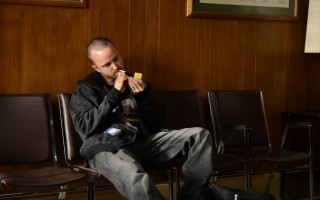 
The vibrant Michelle Aston, as photographed by Blue Blood photog Justice Howard, adorned a giant sign in the front of Meltdown Comics as part of the Dangerous Toys art show. There was appropriately a tattoo shop next door, which you can see in my snapshots of the event. Dangerous Toys was a joint art show […]