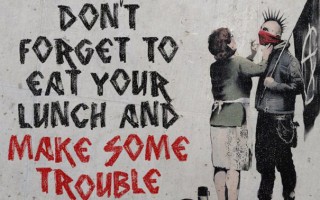 Don’t Forget to Eat Your Lunch and Make Some Trouble


I love this Banksy artwork. The internet seems to think it is possible that the words are an anonymous addition and Banksy is not saying whether that part is him too or not. I like Banksy’s work in general, but this piece really resonates above and beyond. I don’t think my mommy meant to send […]