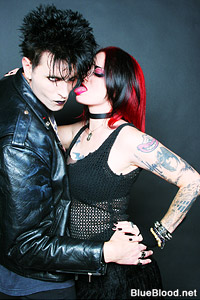 As I mentioned earlier, Blue Blood has been doing a number of media sponsorships as we move into our fifteenth year and Blue Blood was the media sponsor for the Release the Bats Nine Year Anniversary. It was an amazing evening.

Dave and Jenn Bats were the hosts with the most. DJ Shane Taleda, of Element and STG fame, celebrated his birthday. The band Fangs on Fur did their deathrock meets Burning Man performance. And a good time was had by all.

So, of course, Forrest Black and I shot a ton of artistic portraits of a bunch of the fiends who came out to help celebrate. You can see photo galleries at the following links:

Posted by Amelia G on November 14, 2007. Filed under Blue Blood. You can follow any responses to this entry through the RSS 2.0. You can leave a response or trackback to this entry
Tags: dahlia-dark, deathrock, eva-o, fangs-on-fur, media-sponsor, michelle-aston, release-the-bats, stg, thistle-harlequin, voodoo