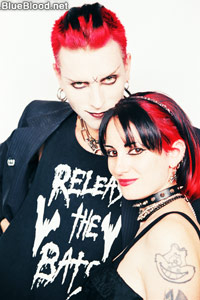 As Blue Blood comes up on our fifteen year anniversary — wait a second, wtf? Did I just say fifteen year anniversary? It feels like it was only yesterday that I was sitting on the floor of my punk rock group house, folding issues of Black Leather Times with my unsavory pals, and talking about how I was thinking about trying something glossier and maybe more erotically-oriented.

Doing Blue Blood in print plunged me headlong into a world which included so much which fascinated and intrigued me. One of my favorite things was trading publications with like-minded zinesters all over the world, showing them what I made and getting to see what they created. I think it was trading zines with the late great Ghastly magazine which eventually led me to meet up with the multi-talented deathrock crew from Release the Bats.

Some of how the world has turned out is certainly not what I envisioned when I took the road less traveled, but I guess fifteen years and going strong means I chose okay. I hope. A funny thing about being a lean independent but workaholic organization like Blue Blood is that we always have a ridiculous number of projects going on at once and sometimes some projects happen bizarrely fast, while others get completed on a timeline that only seems natural to vampires.

Speaking of the undead, I have really enjoyed the photographic work Forrest Black and I have created shooting at nightclubs over the years. In current internet business terms, I guess Blue Blood is technically the media sponsor for the upcoming Nine Year Anniversary of Release the Bats. But really the Blue Blood crew is just going to be kicking it old skool with our longtime pals at RTB and photographing them for posterity. Right now, we’re posting the photos Forrest Black and I shot at the Release the Bats Deathrock Prom to give you all an idea of how spectacular it is going to be. If you are anywhere in Southern California, I recommend you come on out to Release the Bats at Que Sera in Long Beach this Friday. We’ll be shooting a few of the most over-the-top deathrockers there and there will be a whole lot of drinking and rejoicing, if you are into dressing up or drinking or celebrating. Dress to be caught dead!

Posted by Amelia G on October 22, 2007. Filed under Blue Blood. You can follow any responses to this entry through the RSS 2.0. You can leave a response or trackback to this entry
Tags: anniversary, blt, blue blood, deathrock, deathrockers, drinking, media-sponsor, release-the-bats