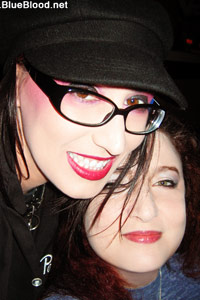 A few weeks back, my good friend TC, lead singer of Satiate and Blue Blood writer, celebrated her birthday. TC is into her Americana, so the theme of the evening was bowling and Pabst Blue Ribbon (and later tittays, tittays, tittays.) We started off the evening at Lucky Strike Lanes. The bowling alley at the flailing Hollywood and Highland mall advertises itself as upscale and I generally end up there fairly regularly when various porn companies rent out the VIP for parties. The teams were roughly divided along band lines of Satiate versus Dead Girls Corporation. I played on the birthday girl’s team and we were utterly pasted by DGC. In my defense, although I do not do an approach, I am not a terrible bowler, but Lucky Strike Lanes has an awful ball selection on a weekend night and their lanes are non-standard length and a bunch of their machinery seems oddly timed. Not in my defense, the other team also had to contend with the same sucky ball selection and non-standard lane length and oddly timed machinery. I swear all the balls seemed like they were made for giant steroid users with baby hands, like sixteen pound balls only a little kid could get a finger spread in. At one point, I accidentally threw one of the balls our lane was using when the system was actually changing pins and my ball went down the middle of the lane, got stopped by the pin-sweeper, and just kind of hung out there. I finally went up the lane to retrieve it. To my friends’ amusement and the bowling alley personnel’s annoyance. I can’t help it if I’m a DIY problem-solver.

Continuing my beer-related sports activities for the night, we all went across the street to Powerhouse afterwards. Powerhouse has electronic dart boards. 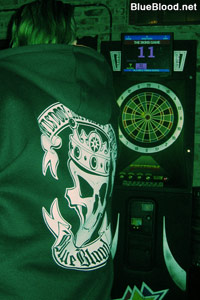 There is something tremendously and poignantly Hollywood about producing something as basic as a darts game for hole-in-the-wall bars as a big budget extravaganza with special effects. I am not a terrible bowler, but I have always been a wretchedly bad darts player and I haven’t played in years. I am undaunted by fear of failure, so I decide to have a go at darts. Throwing darts into cork board is difficult. Throwing darts into a dart board structured like a Lite Brite is even more difficult. The only plus being that, if you suck so bad that you don’t hit the dart board at all, it does not count as a turn and you get to keep playing until you sink a dart into one of the holes and it registers electronically. So I am determinedly attempting to connect darts with the electronic dartboard. Pretty soon, it seems like most of the bar is watching me play darts. Badly. Probably because, if they were going to lose an eye, they wanted to see their blindness coming. Finally, a cute boy named Deacon comes up to me and starts to say, “I’m only saying this because I work here . . .” At this point, I kind of expect him to tell me to, for the love of all that is holy, put the fucking darts down. Instead he gives me pointers on how to throw in such a way that I am less likely to turn those in line for the men’s room into pin cushions. The Powerhouse is awesome! Forrest Black beats me at darts. TC double-fists beers until she got to the “Is there anybody here who has not seen my tittays?” portion of the evening. Happy birthday, girl! 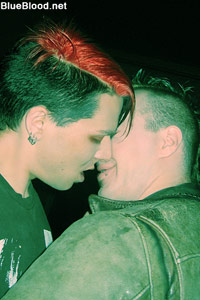 Afterwards, we hit Miss Kitty’s pervy club night at The Dragonfly. Billy, aka Deviant Designs from the Blue Blood boards, entertains us by making out with his friend JT. Scar watches intently for a while. She has been peer-pressuring Billy to do this for pretty much the entire evening, from before they even got to the club. Finally, she says that she has the oddest feeling like someone just walked in on her masturbating. I point out that now she knows how she makes all the guys she knows feel. She doesn’t seem to get what exactly the similarity would be, but I’m not sure there is all that much blood in her brain at the time.

Strip bowling would probably be okay though.