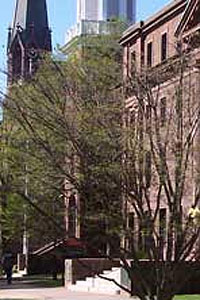 Since 1992, Blue Blood has been about encouraging people to think critically and not just go along with the herd. My hair is purple and red at the moment. But the hair color is a signifier, not the endgame. What I mean by this is that all of us who fought the battle to convince the world that someone with primary-colored hair or tattoos could be beautiful or sexy, we can all pat ourselves on the back and go home, if that was all the whole thing was about. That battle is won. But the point is that the physical appearance was supposed to be about being a maverick and living on your own terms, about marching to the beat of your own drummer. If mohawks become trendy, then having one does not necessarily signify that one is a nonconformist. You can still aesthetically enjoy very tall hair, but the most important body part in the battle against conformity is slightly lower — your brain. You need to have an evolved intellect to avoid being a bah bah sheep conformist.

I’m about to tell you all the most important lesson of a liberal arts education and it is not even going to cost you a hundred grand or whatever higher learning is priced at these days. I was less enamored of the lessons I learned in school, while I was paying off the tab, so here is the most crucial stuff for free. My parents certainly deserve most of the credit for my brain, but my education really helped ingrain some of their lessons.

In order to have an intelligent and human approach to the world, you must learn to be analytical and think critically. Some people are born more or less disposed to having these abilities, but they are definitely learned skills. The direction culture is moving, driven by technology, does not nurture skills in analysis and critical thinking. First television advertisers, and then internet marketers, found that people respond most primally to sound bites and slogans, as opposed to actual data. As a result, a lot of modern debate, especially online, sounds like the old “Tastes great!” vs “Less Filling!” argument. A person capable of analysis and thinking critically would look at that argument and realize that a discussion of Miller Lite probably entailed a beverage which did not taste good at all to most people and which would indeed be less filling because fewer people would drink much of it.

Which is a tongue-in-cheek way of saying that you need to make up your own mind. When you are presented with a debate or controversy, you need to deconstruct what is actually being discussed. What are the sides of the issue? What is each side actually trying to accomplish? Who are the people presenting the sides of this issue? What, if anything, do these people stand to gain from one or another outcome? Are the people debating a particular side anonymous?

Politicians and salesmen will frequently present their own viewpoint as the side that all people of a certain type will be on. This is to induce everyone who is that type of person to side with them. For example, “if you care about children, you have to donate to my campaign.” Or, “if you are artistic and independent, you have to buy my product.” You need to analyze what the actual issues are and what the actual qualities of a product are. If you do not, then you are doomed to sheepdom.

Once you figure out what the actual issues and values being presented really are, as best you can discern, you need to think critically about them. You might love children and think of yourself as very artistic and independent. But that does not mean you need to buy what a politician or salesman is selling. Thinking critically means deciding for yourself, being able to process new data as it becomes available for your analysis, and determining for yourself how the real issues actually fit with your personal values. Thinking critically means not just wholesale swallowing whatever the last person you talked to told you to think. It means questioning authority and thinking for yourself.

I am often asked why I permit dissenting opinions on the Blue Blood boards. How can I permit people to disagree with me, with the only rule being that they have to be capable of explaining and supporting what they say, preferably without sloganeering or name-calling? So many forums online censor what can be posted in order to make sure as many people as possible will eat the sound bite argument and site owners will not have to back up what they say. So I try to provide a venue where people from many different walks of life can come together to exchange their varied points of view.

Thinking critically combined with being analytical means being able to find the real answers which are best for you, means being your own person. Even if some of your tastes and decisions end up being common ones, coming to your conclusions via critical thinking and analysis means being a nonconformist inside your own gray matter. Where it counts the most.

I believe there is nothing more important than individual liberty. Black eyeliner and glitter lipstick might be ways of expressing your love of freedom, but they will not make you free. Only application of your unfettered brain can do that.

Posted by Amelia G on June 22, 2008. Filed under Blue Blood. You can follow any responses to this entry through the RSS 2.0. You can leave a response or trackback to this entry
Tags: black, blue blood, conformist, conformity, critical-thinking, education, eyeliner, glitter, hair, haircuts, intellect, intelligence, internet, lipstick, mohawks, nonconformist, television