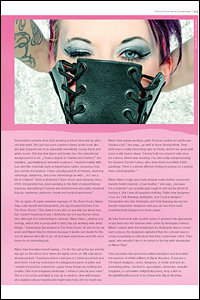 The new issue of Marquis is hitting European newsstands now. This makes twenty-six or twenty-seven issues in a row of Marquis, the highest circulation glossy fetish magazine in the world, which have featured work by yours truly and Forrest Black. As you probably know, Forrest Black and I do the Big in America column. I write it and he and I shoot it.

For this issue, we featured Serena Toxicat, Nixon Sixx, Vampirabat, Eirik Aswang, and Antiseptic Fashion, and there are mentions of tons of cool pervy events and people including photographers, directors, painters, and designers. I first met author and pro-domme Serena Toxicat more than a decade ago when she slept in my living room, having come through my town as a new member of the gothic gypsy carnival which is the band Apocalypse Theatre. She has a book out now called Evangeline and the Drama Wheel, based largely on her travels and adventures with Apocalypse Theatre and partly on her personal passions and interests in sex magick. We’ve known the dangerously adventurous and itinerant Nixon Sixx since 2002 when she was living in New Orleans and Forrest Black and I were guest speakers at the ill-fated GothCon held there. We’ve had a lot of fun shooting in NOLA whatever events we came through for. Beautiful city which attracts beautiful people, but New Orleans is also a place I’m always glad to know I’ve got a plane ticket or car waiting to whisk me home. Forrest Black and I have only known Vampirabat since this past Fall, but I’m already thrilled with the images we’ve been able to create together. You can see a sneak peek in the NSFW comments on this article and expect to see sets of her posting soon to BlueBlood.com. We first met designer Eirik Aswang at the venerable Death Guild nightclub and, of course, everyone here knows the esteemed Antiseptic Fashion for both their fascinating clothing design and their threads about personal hygiene products which look like cum. It, err, comes to me now that perhaps I should have considered that before using the shower at their spacious San Francisco studio. Oh well, too late now.

The English edition of Marquis #44 will be crossing the Atlantic in a few weeks, so watch for it on American newsstands soon. NSFW preview after the jump.

Posted by Amelia G on July 1, 2008. Filed under Blue Blood. You can follow any responses to this entry through the RSS 2.0. You can leave a response or trackback to this entry
Tags: antiseptic-fashion, apocalypse-theatre, death-guild, eirik-aswang, fetish, fetish-magazine, forrest black, gothcon, marquis, nixon-sixx, serena-toxicat, vampirabat