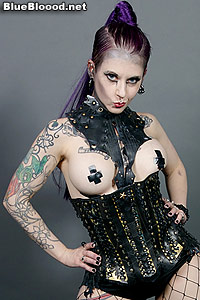 The end of Spring was approaching in San Francisco and that meant that the annual Emerging Illusions Alternative Fashion Show was soon to happen. For those unaware, Emerging Illusions is meant to showcase up and coming fashion/costume designers from the Goth, punk and industrial scenes.

Again, I was honored to be asked to set up a mini studio backstage and shoot the models and designers, make-up artists and hair stylists and anyone else who wanted to pose.

The smell of make-up and hair spray filled to backstage area. Nearly every square inch of floor was covered by people, clothes and props. Activity was everywhere. Make-up being applied, hair being styled, models dressing and undressing, dancers stretching out. It was more difficult to negotiate than the dance floor when the DJ plays everybody’s favorite song.

And it was no wonder that it was packed. Each designer is limited to only five or six models and provides their own hair and make-up people. This year, saw 14 designers: Somnabulance, Wisp-her Wear, Gibbous, Severd, Eirik Aswang, Lisa Goblin, The Window Lady, Dragoness, Chelsea Aragon, saKAna Desgins, Larvae, Shawk Designs, Shadow Bound and Clotho Constrictor. Plus there were stage crew running the show, photographers & videographers and the occasional friend of someone.

As I set up my equipment, I looked over the outfits being worn by those already dressed. With fourteen designers, their designs were as diversified as you would imagine with outfits ranging from everyday wear to clubwear to costumes to things you’d probably only wear at Burning Man if you wear anything at Burning Man.

Though I really enjoy the energy backstage, my only regret in being backstage is I don’t get to see the show. This is because 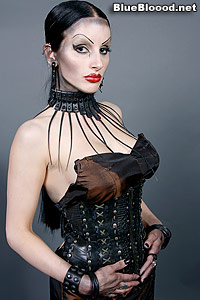 Emerging Illusions is not a simple fashion show. One thing that the organizer, Miqua, has done, is to add broader appeal by eschewing the catwalk. No models simply strutting up and down the stage in this fashion show. The designers are encouraged to create mini performance pieces to showcase their creations. So rather than a fashion show, you get a show that has fashion.

Luckily, after I had everything set up, I had some time to watch some of the rehearsals. And again, the range of performances varied as vastly as the style of clothes. From dolls coming to life and turning their little girl owner into one of them to handmaidens who feed their queen to sea demons to a post-apocalyptic, spy-thiller demon hunt amid snowing fallout. I was even asked to stand in for Vampirabat and Nixon Sixx during one rehearsal. Not an easy task, as I am the opposite of what comes to mind when the names of Vampirabat or Nixon Sixx even come up. 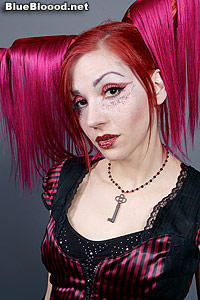 Even before the show started, I was taking pictures and shot nearly continuously for the next six hours. And with the exception of a wayward mannequin punching a hole in my backdrop and fisticuffs nearly breaking out between two groups of models over who was going to shoot next, it was a pretty fun-filled evening.

The show for 2009 is already looking to be the biggest of them all.

If you’d like more information on the show or the designers or where to purchase clothing, visit the Emerging Illusions website.

Posted by John Ashton Keller on October 14, 2008. Filed under Blue Blood. You can follow any responses to this entry through the RSS 2.0. You can leave a response or trackback to this entry
Tags: alternative, burning-man, clothing, costume, costumes, costuming, designers, emerging-illusions, fashion, fashion-show, hair, models, nikki-sixx, photographer, vampirabat