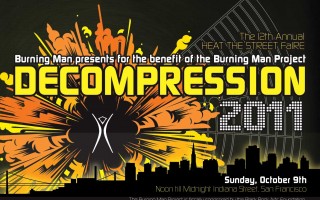 
This coming Sunday, October 9, participants of the Burning Man festival will be “decompressing” on the streets of San Francisco. It’s the 12th annual Decompression “Heat the Street Faire,” celebrating 25 years of Burning Man. The event features 12 hours of performances, fire, dance, live music, DJs, art, imagery from Burning Man 2011 and, of […]

Halcyon Gets Ready for the Playa

- by Amelia G in Happenings, Personalities


Watching Halcyon get ready to go to Burning Man is always enough to make me wish they held it at a four star hotel, instead of the insanely hot desert. I’m addicted to hot baths and cool air. Honestly, I pretty much wilt, if my environment gets too hot for too long, although a dry […]


As I rode back from the airport yesterday, my car passed a bevy of Blue Blood hotties including Roxy Contin and others, all decked out and waving Doomsday signs. This reminded me that I wanted to tell you all about the upcoming flick. (These two things are related; they were promoting the movie, not predicting […]