Christian Slater in My Own Worst Enemy 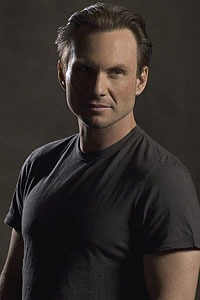 After a brief hiatus to make room for election coverage, My Own Worst Enemy returns to airing on NBC tonight after the supposedly revamped Heroes. If you have not checked out this new television vehicle for Christian Slater, you can watch the first three full episodes of MOWE online for free now.

If you like espionage with just a dash of science fiction, you’ll probably enjoy this show. In its general category, My Own Worst Enemy is a lot more fun than MI-5 and a bit less fun than Burn Notice. MOWE also has a bit of an interesting externalized study of the sorts of internal conflicts many people face. Christian Slater stars in MOWE as a super spy who has had a reverse-Manchurian candidate done on him. The norm in this sort of storyline is to have a regular person who is secretly a ticking time bomb of a killer. It makes so much more sense psychologically and just logically to have a multilingual martial artist military guy create a normal guy cover identity. I want someone to give me a chip where I can also live a milquetoast life and communicate with my alter-ego about the pros and cons via cell phone video messages.

The conventional wisdom in Hollywood, for a long time, was that movie stars could not do TV, that a movie star who did TV was finished. With shows like Breaking Bad, The Wire, and Mad Men being so obviously higher quality and more interesting than most movies today, it gets harder to view acting on television as somehow lesser than a role in Saw V or Sex Drive. With an Oscar winner like Anna Paquin starring in True Blood, Alec Baldwin doing a hilariously good job on 30 Rock, and Entourage being practically a who’s who of Hollywood, it is simply more implausible for anyone to claim that television is a step down. The current season of Entourage is ironically somewhat about the conflict actors face when deciding whether they will strive to be cast in movies or television roles.

Nonetheless, there are people saying how Christian Slater has come down in the world if he is starring on an entertaining new spy series on network television. As near as I can tell, a lot of Christian Slater fans first discovered him when he starred in the very very dark (and very very awesome) teen comedy Heathers in 1989. So I’ve seen a ridiculous number of reviews of the show going on and on and on about how Christian Slater has obviously had Botox, like that is a bad thing. Yes, anyone who has spent a significant amount of time watching Christian Slater act will probably be of the opinion that his forehead would not be that smooth without a bit of Botox. He hasn’t overdone it. He is still more than expressive enough to effectively convey two very different personalities, with his acting. If there are some televisions reviewers who are pissed off that they are not aging as well as Christian Slater, here is the link to the Botox site, if you really ever thought you looked like Winona Rider and there was a chance J.D. was going to come to your window and plot murders with you. Good luck. If not, then I recommend just watching the show for its entertainment value and not for beauty tips.

My Own Worst Enemy really is a fun show. I like to contemplate what awful jokes different sides of my general personality would like to play on one another, if they were divided into distinct personalities. MOWE has some cool gadgets too. I like cool gadgets.

Posted by Amelia G on November 10, 2008. Filed under Blue Blood. You can follow any responses to this entry through the RSS 2.0. You can leave a response or trackback to this entry
Tags: alec-baldwin, anna-paquin, burn-notice, christian-slater, mad men, manchurian-candidate, my-own-worst-enemy, television, true-blood