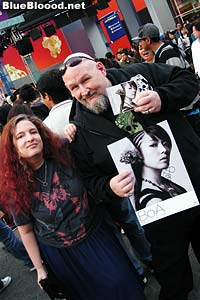 One of the many things I liked about David Aaron Clark was that he had eclectic interests and he had an artist’s drive to share his passions. In Korea, BoA is not Bank of America, but a huge pop act with crazy hot music videos. As part of a campaign to launch her in America, she played a special concert at Universal Citywalk. DAC invited me and Forrest Black to go and we had a lot of fun. DAC was too shy to buy the CD and the poster BoA would later autograph, so Forrest went and did it for him. Later DAC treated us to dinner. The shrimp place at Citywalk has wretched food and good drinks, but the important thing was that we enjoyed great conversation. And my glass had flashing lights in it like a mini-rave. David Aaron Clark always claimed he didn’t smile in pictures, but this David Aaron Clark photo gallery demonstrates that he did, under the right circumstances.

A few days ago, I posted my initial personal response to DAC’s passing RIP David Aaron Clark. Here is a list of links to other remembrances by some of the artists, writers, and deviant who mourn him. Los Angeles folks who knew him may be getting together around 7pm tonight in the bar at the ground floor of his former apartment building.

Gram Ponante: Into the Realm with David Aaron Clark

In A Metal Web: The Art of Michael Manning – PURE 02

MistressGenevieve It isn’t all bondage and bon-bons!

Luke is Back: DAC has Passed Away at 49

Luke is Back: DAC Archived on LIB

Posted by Amelia G on December 4, 2009. Filed under Blue Blood. You can follow any responses to this entry through the RSS 2.0. You can leave a response or trackback to this entry
Tags: artists, boa, citywalk, david-aaron-clark, david_aaron_clark, deviants, forrest black, gram-ponante, korea, lukeisback, michael manning, rave, rip, universal, writers