Darth Vader took the bank bailout money and a joyriding grizzly bear ran that car into a tree. Also Discovery reports that sharks have antibiotic-resistant bacteria on them. This has been a really special news week. We already covered Darth Vader getting away with bank robbery (the Sith Lord is still at large with no leads in the case), so let’s recap the week in animal news.

A teenage boy with the apropos name of Ben Story left a peanut butter sandwich in the back of his car parked outside his family’s suburban Denver home. Then a bear opened the unlocked door of the car, shifted the automatic transmission vehicle into neutral, ran the car into a tree, and tore the heck out of the inside of the car trying to get back out. A Colorado Division of Wildlife spokesperson, with the less storyesque name of Tyler Baskfield, said that bears are very smart and totally open unlocked doors all the time. When the drunk driving excuse you give your dad is so ridiculous it makes the front page of Yahoo, you know you’ve maybe gone too far.

Speaking of going to far, want to know how scientists know that sharks carry colonies of antibiotic-resistant bacteria? Discovery’s Eric Bland reports that these findings come from studying swabs taken from shark genital cavities. Now ecologists can study whether fish farming practices or human waste management policies are leading to sharks possessing biological warfare weapons. And that is probably important and interesting. But the real question is: Who thought to themselves that they really needed to swab a shark’s genital cavity in case there was anything dangerous in there?

In all fairness, there were apparently witnesses to the grizzly bear story, so it might not have been teen fiction. Also, there were pictures and, no matter how many special effects blockbusters come out, I continue to believe what I see in pictures. 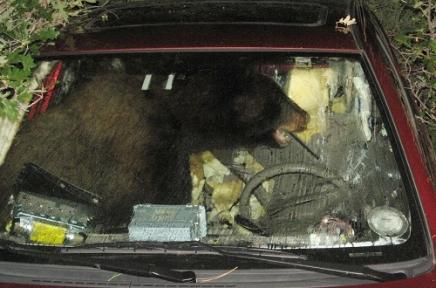 Posted by Amelia G on July 26, 2010. Filed under Oddities, Popcorn. You can follow any responses to this entry through the RSS 2.0. You can leave a response or trackback to this entry
Tags: Bailout, bank, ben story, carjacking, darth vader, discovery, drunk, eric bland, grizzly bear, joyriding, shark, sharks, sith lord, tyler baskfield