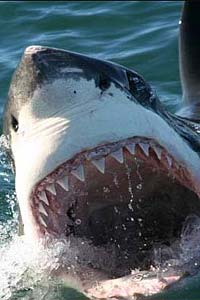 According to science journalist Jennifer Viegas, reporting for Discovery News, a number of species of sharks can make themselves invisible when they feel like it. Scientist Julien Claes is the lead author of the Laboratory of Marine Biology, Earth and Life Institute at the Catholic University of Louvain findings published in the Journal of Experimental Marine Biology and Ecology. (That is a mouthful. I feel great sympathy for whoever has to lay out his business cards and fit all that.) Julien Claes told Discovery News that, approximate one in ten sharks is luminous, meaning it has photophores with the ability to produce and emit light.

Although luminescence is not an uncommon camouflage strategy at the water depths the sharks studied hunt in, it had not been noted in sharks before. These sharks appear to have some control over when they are and are not luminous and are able to so precisely mimic the likely ambient light that they can become invisible to prey. The sharks seem to also spontaneously emit the camouflaging light under stress conditions. I know I often wish I could become invisible in stressful situations, so I’m totally with the sharks on this.

Sometimes the sharks are also especially luminous in the sex organ region. Not in a way which blends in with their environment. My favorite line from the Discovery article is not one I feel I can do justice with a paraphrase:

“Similar to how lipstick makes a woman’s lips stand out more, the shark’s light may also turn on members of the opposite sex.“

So, if ya wanna get with a shark, you’d best be growing photophores. Or at least that may give you a boost with one out of ten sharks, who are definitely the hottest ones.

I wonder if an invisible shark army would be more likely to follow a general with the ability to produce and emit light from her flesh? Actually, I guess most armies are more inclined to follow generals whose skin emits a halo of light.

Posted by Amelia G on May 27, 2010. Filed under Blue Blood. You can follow any responses to this entry through the RSS 2.0. You can leave a response or trackback to this entry
Tags: discovery, invisible, invisible shark army, jennifer viegas, julien claes, lipstick, luminescence, luminous, photophores, science, sex, shark, sharks, stress, water