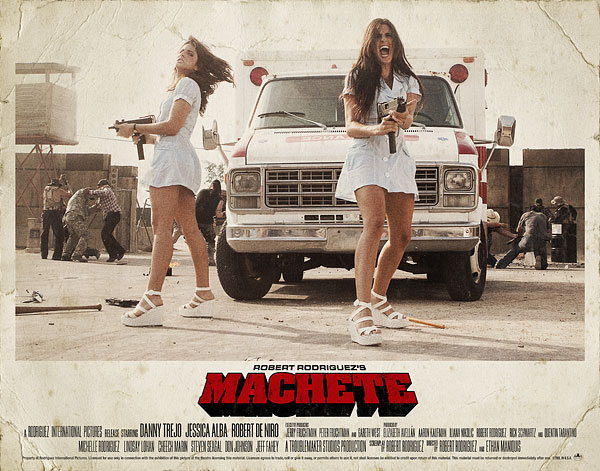 There is a sort of school of modern directors who often collaborate and make movies within movies. In the Grindhouse outing by Quentin Tarantino and Robert Rodriguez, Robert Rodriguez had a sort of faux trailer, within the movie, for a movie called Machete. Fans kept coming up to him and asking if this was a real movie he was working on. Caught up in the feedback loop of fan appreciation, Robert Rodriguez assured them that he was totally working on it.

Apparently, as is often the case with creative projects, he sort of was and sort of wasn’t. The writer/director/editor had cast Danny Trejo a number of times and feels he “he pops and has one of the most amazing faces in cinema history.” Danny Trejo has been in approximately a bazillion movies, but often in a more minor gangster/vampire/bad guy’s henchman sort of role.

Robert Rodridguez says he watched John Woo movies early on and they made him (a) want to be Asian and (b) wish there was something comparable in modern cinema with a Latin flavor. I don’t personally totally get that, as those movies make me fantasize about being badass, but not any particular ethnic flavor of badass. But that’s me.

When shooting Desperado in a small Mexican town, Robert Rodriguez noted that the locals assumed Danny Trejo was the star of the movie, even though his part was actually a small role as a knife-throwing assassin whose name Navajas means knives in Spanish.

Robert Rodriguez elaborates, “In Desperado, Danny was called Navajas, which means knives; in From Dusk Till Dawn he was Razor Charlie, and in Predators he was Cuchillo. So, Danny’s like a whole set of cutlery in and of himself.” The Machete star Danny Trejo laughs, “Every character I play has some kind of knife or sharp object.”

Robert Rodriguez always creates cool stuff and the cast for Machete looks amazing and amusing and creative. Robert De Niro, Jessica Alba, Steven Seagal, Michelle Rodriguez, Don Johnson, and Cheech “Up in Smoke” Marin, all in major roles in the same movie. Plus smaller bits with Lindsay Lohan, Tom “Bloody Stuff” Savini, and Rose McGowan. All this big screen action may have me seeing movies with multiple other humans in the room more often this year. 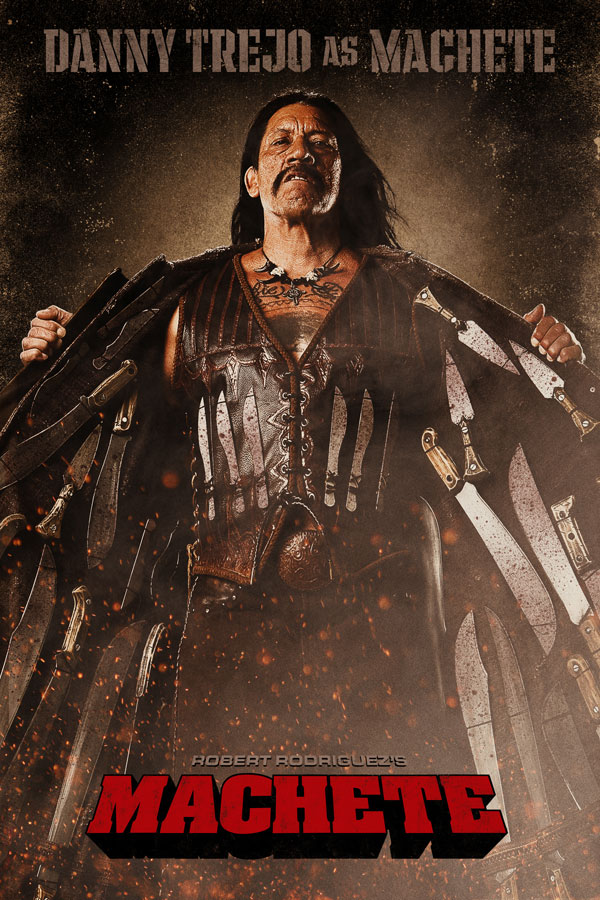 Posted by Amelia G on September 3, 2010. Filed under Popcorn. You can follow any responses to this entry through the RSS 2.0. You can leave a response or trackback to this entry
Tags: badass, danny trejo, director, don johnson, gangster, jessica alba, lindsay lohan, machete, michelle rodriguez, quentin tarantino, robert-de-niro, robert-rodriguez, writer