Trend Micro’s Site Safety is yet another entry in the anti-malware and social control product set. Most companies use some sort of software which tracks where employees go and stops them from going certain places. I am totally on-board for preventing myself from accidentally visiting a known malware site. As a manager, my view is that someone who works on one of my projects should be able to look at whatever the heck they want. On their own time. I do not relate to the SFW vs. NSFW dichotomy. Is it not work? Then it shouldn’t be used at work. But I work mostly with contractors who would just go somewhere else (like their kitchen or just logged off) when they are not working. I get that people in cubes often have down time at lunch or whatever, when it is probably reasonable for them to look at non-work sites.

The problem is that this means big corporations are deciding which types of content are viewable and griefers are given problematic levels of power. For example, etiquette suggests that you should not talk about sex, religion, or politics in polite company. Unfortunately, my Facebook feed is often filled with endless maddening uninformed political opinions. But, if I shoot a beautiful artistic photo of someone nude, an activist work of art which is intended to communicate . . . I’m pretty sure I can’t post it on Facebook. I stopped feeding my LiveJournal feed through Facebook because I didn’t want to self-censor it. However, I’ve had people who actually know me ask if the adult-oriented side of my business has closed, because they keep in touch via Facebook and never see me posting about it there. Because I believe I can’t. I’m trying to comply, but maybe they are more lenient than I think. Needless to say, it bothers me that Facebook’s apparent rules could actually damage the impression people have of my business.

The griefer problem comes in when people complain about what they see, for reasons other than that seeing it was awful. Anyone with a successful site or popular SNS profile has had to deal with griefers. For example, most hot girls I know have had some of their Facebook photos reported for being too racy. Unscrupulous small businesses will report one another to companies like Trend Micro or McAfee or Avast or Malwarebytes or Symantec. Griefer reports may claim that a site has malware or adult content, when it does not. This is why most companies with security products offer a way for users and other impacted people and businesses to get in touch and request that errors be corrected.

In my experience, with Gothic.org and the many other sites I work on, it is incredibly frustrating when you know a site is being blocked by some filters or penalized by some search engines. The result of this is always one of two things (a) despair or (b) censorship. Just like directors dealing with the MPAA, sites will end up censoring much more than possibly even what might be triggering a filter, in near-helpless attempts to be approved by these filtering companies.

Unfortunately, we need filters. Nobody has the bandwidth to really process all the data which comes at us via modern media. So we employ all sorts of robot filters to address this. I personally use the Gmail spam filters to deal with the tens of thousands of unwanted emails my company gets sent daily. Occasionally, Gmail knocks out something I actually want and need, but it is pretty effective on average and there is no way we could pay someone to go through all of those mostly useless emails. So we use the technology available there. When I search in my spam folder to find something which was inaccurately tagged as spam, Google gives me the option to tag it as Not Spam.

I am amused that, as Trend Micro Hates Goths details, Gmail spam tags bounce messages from Trend Micro. So one mega-corp’s filter knocked out bounce email from another mega-corp in the filtering business. But the problem is that mega-corps are being given the explicit power to determine what we can and cannot learn about, what ideas we may be exposed to, what the delineations of common human knowledge will be. Maybe whether or not one can easily view pictures of black couture and heavy eyeliner is not terribly important. But who gets to decide where the line is where the issue becomes too important to permit censorship of it? If you look at it just right, it is kinda funny that the dystopian, groupthink, panopticon future once feared will come about, not via jackboots on the ground, but for the sake of convenience. 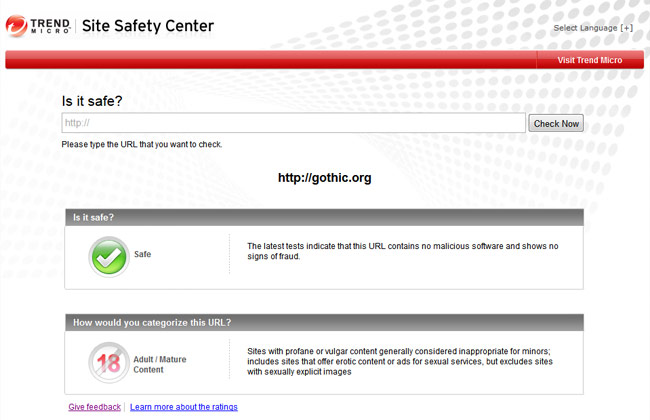