George Lucas Sells to Disney – This explains EVERYTHING about Star Wars

When the Jar Jar Binks movie came out, like a lot of Star Wars fans, I was baffled. Darth Vader re-imagined as an unpleasantly cute kid? Everything looking so sterile? Special effects which were less than convincing?

I confess that seeing Star Wars as a small child was a watershed moment in my life. I’m still a huge science fiction fan, although I was already reading some authors in that genre when the movie came out. I’d say seeing Star Wars really solidified SF fandom as part of my identity though. Harrison Ford as Han Solo was more attractive than Mark Hamill as Luke Skywalker. My elementary school brain puzzled over this seeming paradox for years. (Then I hit puberty and it made sense.) And I’ve pretty much spent my entire existence working on recreating the Cantina scene from Star Wars IRL.

When the Star Wars movies started coming out for home viewing, I deliberately did not re-watch them because I worried that they could not possibly be as incredible as they were in my mind’s eye. But I had to see a new Star Wars movie. So I was as disappointed as all the other hardcore fans were when, two decades after the brilliance, George Lucas started putting out Star Wars movies which seemed to come from a very different place.

From a business acquisition perspective, however, it all makes sense. Kind of like how adding teenage hormones makes Han Solo’s appeal almost logical. There are very few entertainment companies which could afford to pay $4 billion for anything, but Disney is surely one of them. Yeah, yeah, only half of the four billion dollars Disney paid for LucasFilm is in real money, but, still, that is billion with a B. So adding a self-satisfied grotesquely pseudo adorable child seems like a good way to attract Disney buyers. Stuffed toy merch is even better than action figures and the more spin-offs and licenses the better, when one is looking for buyout suitors. I get it. Part of me is thinking, hey, good for George Lucas, the man went from counterculture commune style artist guy to mega-paid. We should all be so fortunate and I’d like to believe that trajectory is a reasonable one.

But the fan part of me is kind of mad that I feel kind of duped. Although IMDB still credits George Lucas as the writer of Star Wars, I’m pretty sure it is common knowledge that eminently readable best-selling genre author Alan Dean Foster actually wrote it. It has been years since I was enough of a fan of Star Wars to read about it, but, as I recall, George Lucas was described as being shy about sharing his vision and having to have his wife Marcia Lucas communicate his direction to the actors. I think she won an Oscar for her editing on the film, but I’ve certainly heard fans wonder if her exit from those projects explains some of the change in tone. Then again, heartbreak will impact an artist’s work. I wanted George Lucas to be a counterculture creative person who made good on his own terms. I’m disappointed because I wanted the wonderful things I believed about George Lucas to all be true, but too many aspects turned out to be just special effects. 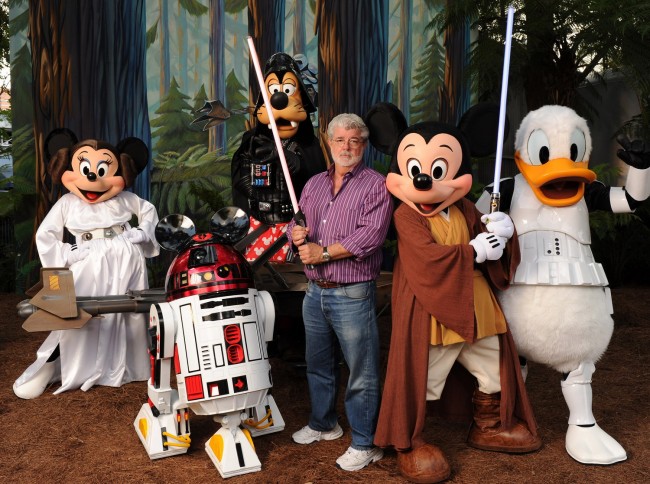 Posted by Amelia G on October 30, 2012. Filed under Headline, Popcorn, Trade/Business. You can follow any responses to this entry through the RSS 2.0. You can leave a response or trackback to this entry
Tags: disney, george-lucas, greedo, han solo, han solo shot first, harrison ford, lucasfilm, luke skywalker, mark hamill, special effects, star wars