Doctor Who, Episode 713: The Name of the Doctor

Errata: I largely dismissed a Gaiman-written ep last week without rousing any sort of complaint or protest. I started this season by wrongly identifying a voice actor and that was a crime. Don’t you people have any standards?

Meanwhile back in the first Downey & Law Holmes movie, Madame Vastra has been summoned to the cells for an audience with some heinous murderer, whose cryptic hissings about the Doc give her cause for concern. And so the Brain Trust must be summoned.

(Somehow this includes Strax, who is partying in Glasgow. Home of the Glasgow Kiss, the Glasgow Smile, and some lovely old pubs for having shovel fights in.)

Speaking of Harry Potter, that invite from Vastra to Clara is so very Hogwarts. Except for maybe the contact sedatives.

So, just like a regular conference call, everyone’s fast asleep. Nice. And River makes her entrance with a wonderfully cheap flash, and we can properly begin.

This being dreamtime, the conference room projector actually works, and Vastra briefs everyone on the heinous murderer’s intel. Which is shocking enough that River even lays off hinting that she and the Doc have boned. And the whispering coalesces into some stylish Victorian Cenobites.

OH MY GOD! THEY KILLED JENNY!

So, more cryptic hissing and whispering and rhyming, and everyone has a shitty wakeup but Clara, who is home with the Doc, who is wearing blinders. Not even symbolic ones. Looks like a napkin. And it looks like we don’t have to deal with the kids this ep. Love the use of “little Daleks” as a term of opprobrium.

And I hate beyond words the shitty job they do of cutting in commercials for US broadcast.

And we’re back, and Clara is pouring tea, and the Doc is (a) weeping (b) SWEARING (c) fleeing. So this Trenzalore thing is clearly a big deal.

Back in the TARDIS, he’s squared himself away, and is ready to extract coordinates from Clara all Robocop style. (Who’s Dorian? Look that up later.) And in a glorious eruption of pedantry, we find out what’s in the road. A head? No, it’s the Doc’s grave, which has been discovered. And which he must never, ever go to. Except now.

The TARDIS bucks like a bronco, all lights out and sparks flying. But since we know she contains a god damned collapsing STAR, this is obviously just histrionics. A little atmospheric friction and here we are on the haunted-house hell world where the Doc popped his clogs.

And obviously the TARDIS just didn’t want to see herself all gone to seed in the middle of a graveyard. Poor dear. And what’s more embarrassing than realizing you’ve been talking all this time and haven’t disconnected the call? At least she didn’t call River a ginger or anything. Which is good, because having an invisible time-traveling genius woman on your side is a nice trick. Especially with a brace of Rhyming Cenobites bearing down on you.

Meanwhile, inside the Big TARDIS, the Victorian Brain Trust is getting it’s bearings. Strax always gets the line of the night, this time with “Surrender your women and intellectuals!” (And Jenny’s back with us. Go Nurse Strax.)

And who’s back? It’s Withnail, and he is bitter and hollow and rolling deep with his Cenobite Echo Body posse. He’s counting down the Doc’s numerous names and costly victories like the jealous second-rater he knows he is. And with everyone assembled, it’s time to start threatening to murder hostages. Luckily the TARDIS can still hear River when she’s on mute.

So, what does a dead Time Lord look like? Sort of like an eternal memorial flame as envisioned by Survival Research Labs. Withnail sees it as an open wound, and an open wound can be entered. Which is about the yuckiest thing ever uttered on this show, frankly.

So yes, Withnail is going to fuck the Doc’s wound, distribute himself along every timeline, and kill every instance of the Doc at once. And the stars fall from the sky and OH MY GOD stop killing Jenny, you fuckers…

And our answer to the mystery of Souffle Girl is that she’s not the Souffle, she’s the Recipe. So Clara is an infinite series of echoes with the same mission, counteracting Infinite Withnail. Also saving the universe, which is a nice knock-on effect.

And the Doc can see and hear River too. You really never know how the mute button is going to work. And yes, watching him smooch an invisible lady must have been pretty weird for the rest of the Brain Trust. We get a rather sweet auf wiedersehen, and the Doc crosses the streams.

And mission accomplished, apparently. So, deep in the triple-inside-out haunted house hell world that is the Doc’s timestream, Clara (actual, non-distributed Clara) comes to. With what has to be the hangover of the year, not to mention all the former Docs flitting to and fro. The (current) Doc sends her a magic leaf to guide her home, there’s a lovely huggy reunion, and we’re off home for tea.

Except, yes, there’s always just on more thing. Yes, a 12th Doctor. And he’s a raggedy renegade who went off the reservation and did something terrible. Which we can wonder about until November. See you then. 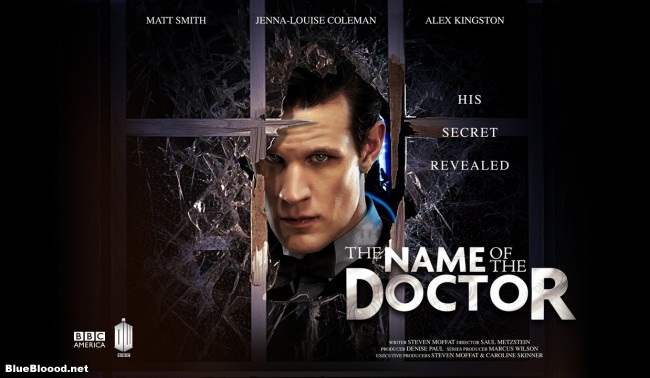 Posted by Will Judy on May 18, 2013. Filed under Headline, Popcorn. You can follow any responses to this entry through the RSS 2.0. You can leave a response or trackback to this entry
Tags: bbc, doctor-who