Anyway, drafty country estate, roomful of mad scientist electronics, Doctor and his lovely assistant at work on a mystery. No, not The Doctor, some other chap in cool glasses. And we’re hunting ghosts, which requires the usual quavery voiced invocation, and leads to lovely assistant getting ghost-choked. And a fateful pounding at the door, and The Doctor and Clara come barging in making terrible jokes.

So, our tweedy ghost hunter is Major Palmer, once of the Ministry of Ungentlemanly Warfare! Oh, Christopher Lee’s old unit. Nice shout out. The Doctor is in a manic phase, throwing around info from the future and dicking around with the Major’s toys. Also, transmundane emanations sounds messy.

We are in Scotland, oops. And Emma is an empath, which sounds horrible even before The Doctor starts gassing on about it. The Major has one of those cop show bulletin boards set up, covered in eerie pix of his quarry, the Caliburn Gast. She’s been around for many a long year, and she doesn’t like Spam. Clever Clogs Clara notes that she’s always in the same pose, much like Paris Hilton.

Quick “did you see that?” gag, and then The Doctor and Clara go bouncing off to the heart of the house to find the Gast. The Major and Emma take a moment to flirt as awkwardly as the laws of time and space can allow.

In the music room, we get creepy feelings, glitching equipment, cold spots, and the usual ghost hunter stuff. Clara steps on the chalk circle (where did he get chalk?) and the house goes nuts. Lightning crack, beastie revealed, and Doc & Clara run for it like Shaggy & Scooby, nearly crashing into the hole in Ringo’s pocket from Yellow Submarine. We collect a few more paranormal experiences, and a message from beyond, and we’re spent.

Eame’s rocker! So awesome. Clara & Emma aren’t whisky drinkers, which is rather dull stereotyping. The Major has emotionally crippling survivor’s guilt and PTSD.

C&E have some girl talk over tea, and both cluelessly deny the hungry side of their relationships with their respective gentlemen. And Emma dishes some empath shade, saying the Doc has a sliver of ice in his heart. Which one, dear?

The TARDIS doesn’t like Clara, and she’s finally noticed. The Doc explains the TARDIS is like a cat, so at some point it will definitely puke in Clara’s favorite shoes. It’s probably just noticed it doesn’t get to to have any fun this season and is blaming Clara.

So, the Doc is doing a scavenger hunt through the history of the planet while sitting still. Which sounds like good fun until he gets to two weeks’ shy of the heat death of the universe and Clara get’s a bit emo. Yes, we’re all ghosts to the man who’s seen the universe begin and end.

Anyway, slideshow. The Doc declines to explain how he got the photos, the name or any of this stuff, but he sells the plan somehow. With balloons. And the Major has a breakthrough, as the Doctor hands out gibberish about why the TARDIS can’t be used to save the Gast. Blah blah pocket universe collapse entropy, funny hats and rope.

The Doc drops into the Pocket Universe all Poltergeist style, finds our Gast, and misses his extraction window. Luckily Clara and the TARDIS reach a detente and go after him.

How is the crystal gear running now, when it was hooked up to the Blue Box? Forget I asked. How can she fly into the universe safely now and not before? Forget I asked. Seeing the crab monster get doored by a flying TARDIS makes up for it.

And false ending, the paradoxes resolve themselves, romance is not dead, and somehow we’re not an inch closer to solving the Mystery of Souffle Girl. At least she’s made friends with the TARDIS. 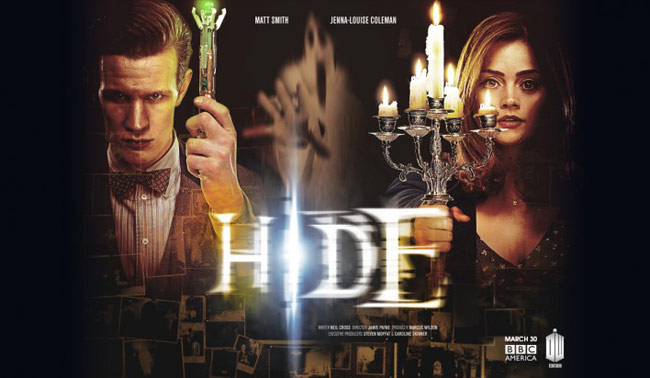 Posted by Will Judy on April 20, 2013. Filed under Headline, Popcorn. You can follow any responses to this entry through the RSS 2.0. You can leave a response or trackback to this entry
Tags: doctor-who, jenna louise coleman, matt smith