The Doctor is moping around greater Manchester in the 80s, reading a Dennis the Menace comic and stalking young lovers. Must not be a big week for disasters in need of averting. A bit of additional stalking reveals that these are present-day Souffle Girl’s parents, and that her mom died some years ago, and her dad in old man makeup looks like a much beefier David Tennant. Our big takeaway from this is the significance of the leaf in SG’s childhood book.

The Doctor keeps his promise from last ep to drop by tomorrow, and SG has apparently decided she’s in and it’s on. Asked where and when in all of space and time she’d like to go, she blanks (so would you), and simply asks to see something awesome. So the Doc hauls her off to the titular set of planetary rings, which fits the bill nicely. But wait, there’s more! There’s a planet full of Mos Eisley Cantina-grade aliens, a millennial religious festival, a moped that looks like a plywood go-kart, and a wee girl in peril. There’s no Doctor, however, and SG is left to fend for herself on a super-alien world.

This barely fazes her, and next thing we know she’s sneaking around empty buildings and rescuing a tween with massive keloid facial scars from a pack of rookie Cenobites. Since she didn’t hang onto the Tardis key the Doc gave her two centuries ago, and the Tardis doesn’t trust her, they end up hiding behind it. Good plan.

Merry Galel, the Queen of Years, turns out to be a combination of the Dalai Lama and Buffy the Vampire Slayer, only with singing instead of kung fu. And she has stage fright, poor lamb. SG plays the nice auntie and tells her a story to buck her up, which does the trick and also gives us a notion of why SG doesn’t panic when ditched in an alien bazaar. SG hands MG back to her handlers, and the Doctor shows up, blithe as can be, gnawing on a blue flavor lightfruit. And it’s time to barge into the font row of the aforementioned millennial religious festival!

Merry, having been assured that everything will be fine, starts belting out her big number and gets hit by a tractor beam. Not fine. Doc and SG haul ass back to barking moped lady, SG pawns her mom’s ring, and since there’s a new rule against taking the Tardis into battle, they go sputtering after MG through the vacuum of space on a crap Yamaha scooter. Since dogs run faster than those things, the rescue fails and MG gets sucked into a Land of the Lost pylon, where a traumatized vicar is singing Soft Kitty to a rage mummy in a box.

Rage mummy starts waking up, the Doc gets the door open, SG gets stuck to the box, traumatized vicar disintegrates himself, rage mummy rages. The Doctor goes all Carl Sagan on MG and tells her she’s a special snowflake made of stars, which is a weird thing to tell a kid, but it works and it’s better than watching her get her soul eaten. Then the rookie Cenobites show up.

Battle, escape, more battle, Rage Mummy busts the box, particle beam fires and creates and orangey version of the death planet from 5th Element. There’s some banter about scones and the Doc is going to fight the big bad while SG and MG clear out.

The big bad makes some faces, looking like a combo of a jack-o-lantern and Mr. Bill. MG leads the gathered faithful in a rousing chorus of Soft Kitty. The Doctor tries to talk the big bad to death with a version of the Tannhauser Gate soliloquy from the end of Blade Runner, and it just gives the big bad a softie.

SG shows up and plays the Most Important Leaf in Human History card on the big bad, and SG’s infinite grief over the lost potential of her mum’s life doesn’t appear to digest all that well. And the big bad implodes with a big crunchy MOOB.

And we’re back in greater Manchester, which looks different. Well, travel changes your perspective. And it looks like the Doctor has seduced himself a new companion, or a new version of the one that got away. He looks a bit cross about it, frankly. Well, she is impossible.

Next week: Das Boot! With nukes! Could be exciting! 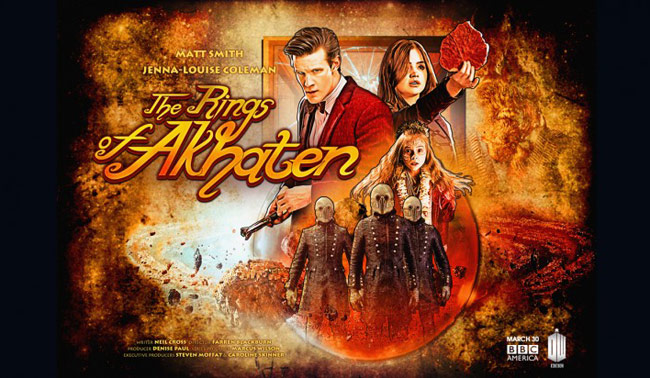 Posted by Will Judy on April 6, 2013. Filed under Headline, Popcorn. You can follow any responses to this entry through the RSS 2.0. You can leave a response or trackback to this entry
Tags: doctor-who, jenna louise coleman, matt smith