We open this week’s episode of Doctor Who on the Nostromo/Nebuchadnezzar, or rather, the dingy greenish interior of a spaceship with grouchy dudes arguing about salvage. One of them is an android, one’s sleeping. And I’m guessing two of them are the Van Baalen bros., so one plays guitar and the other drums.

Doc & SG are squabbling too, apparently because the TARDIS doesn’t like SG and that won’t do. The TARDIS probably just thinks that dress is awful. (It is. It’s twee and frumpy, which is hard to do with a red dress.) So the Doc decides SG needs a turn at the controls and sets the ship to Easy Mode, which makes her visible on the Asteroids game on the good ship Van Baalen.

And we get another God Damned Tractor Beam. (Are they listening to the Cult? Check later.)

So the TARDIS has been captured as salvage, and is resisting attempts to breach with a hammer and a laser cement saw. She’s also landed smack on the Doc, all wicked witch style. No harm done, though, as he’s instantly up and fast talking the Bros VB, since SG is still on board and must be rescued.

SG, meanwhile, is under some easily moved rubble, but rested and ready to make bad decisions. (Cloister Bell rings? Closed captioning on this show is so weird.) The doc turns the fan on and then sets the self destructor as motivation for his helpers. Salvage of a lifetime means SG, which makes very little sense to me in this context.

Salvage Girl found the prop room! Such fun. This includes a bunch of models, a wee TARDIS, and Snarling Facepalm Monster. More running.

And Capt. Gregor Van B, with 30 min to live, is plotting to steal shit. Splitting up means You go back and start wrecking the living ship we are aboard. Capt. Gregor has clearly got space madness.

Salvage Girl runs past the observatory and the swimming pool, and hides from Fiery Facepalm in the Hogwarts library. Bram Van B is busy pulling the navigation controls apart (flimsy!) and shakes loose a bunch of old show dialogue. And Gregor discovers the Room of Requirement, which is full of lightfruit vines. Gregor, who is an asshole beyond reason, ignores the Doc and pinches a lightfruit and brazens his way out the door. (Which wasn’t there.)

Back in the library, SG has found a big leatherbound edition of the History of the Time War, and flips to a relevant passage with ease before being interrupted by Facepalm, who is persistent but sucks at finding people. Doc, Gregor, and Tricky are getting toyed with as the ship turns into the house from Clue.

Two-headed lava zombie! And more running. Now Doc & Tricky are in the console room, except not? OK, echo room. All makes sense. SG gets plucked from other reality, where she was having a face-off with the other lava zombie. And the countdown was a bluff and the engine exploding was a bluff, and No, it turns out that all that was real. Uh-oh. So, mission to the centre of the ship, go go go.

SG, separated from the group again, get to watch some other echoes of herself and the Doc bantering. So there’s a rupture in time. Makes sense. An inifinite ship got tweaked by a tractor beam. And we’ve gone to Hellraiser territory, with random spikes bursting for the walls. One of which has impaled Tricky, who isn’t actually an android and whose bros are the new gold standard for space madness.

And we see the engine of the TARDIS. Yes, that’s a star. A ship that contains a star got critically damaged in a salvage accident. And there ain’t no sunscreen tough enough to protect you from a suspended star, which aids us in understanding who Facepalm and Friends actually are. So we get to see the Doc killed with an axe, in a way.

Having escaped from whatever was happening there and locked the door that was destroyed a few seconds ago, Doc and SG get trapped on a cliffside and have a heart-to-heart about the once and future SGs, which ends with no resolution but we do get the only decent cut to commercial in the entire ep when they go off the cliff Indiana Jones style.

They land in the Matrix loading program, and the burn on SG’s palm turns out to have a role to play. And, sturm und drang aside, the end of this ep erases the ep. The VB Bros. are less assholey, SG is wearing a better outfit, and we get another Victorian ep next week. 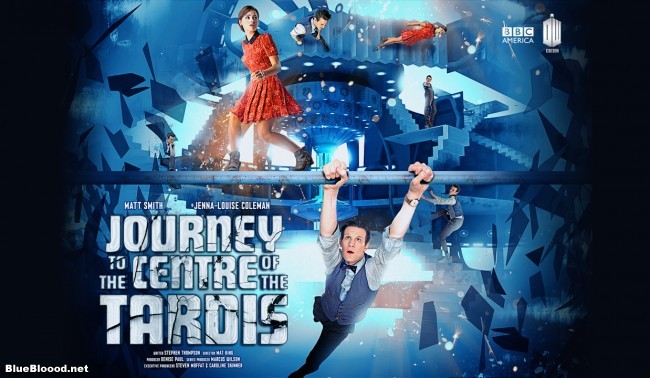 Posted by Will Judy on April 27, 2013. Filed under Headline, Popcorn. You can follow any responses to this entry through the RSS 2.0. You can leave a response or trackback to this entry
Tags: doctor-who, jenna louise coleman, matt smith, tardis