North Pole! 1983! Not even really the 80s yet! Pretty much the 70s with cheaper synths! And beneath the slightly cheesy looking CGI depths, it’s a Soviet sub! And holy dickens, it’s Davos from Game of Thrones! His beard looks fantastic!

OK, I’ll settle down. Capt. Davos and his sinister 2nd in command are doing a launch drill, and are interrupted by old English actor who has been in everything. He’s the crusty but benign professor here, and he’s singing along with Ultravox on his curiously new Walkman. (Anachronism check: do that later.) Ah, Vienna: The song I sing on the Orange line platform when I’m coming home squiffy.

Sinister 2nd in command is establishing himself as a martinet and an overwound dick, and looks uncannily like the tall one from that comedy duo whose deal I can’t keep straight. By Vectron’s Kindly Claw! And this being a sub crew in 1983, they haven’t seen John Carpenter’s The Thing, so they can be forgiven for not following protocols regarding aliens frozen in slabs. (Protocol #1: No blowtorches.)

Which is why we get an armed alien Kaiju-looking monster, striding around the incredibly spacious sub and wreaking havoc. It’s raining like Bladerunner, the sub is sinking, and lucky for everyone, Tardis arrives, spilling out The Doctor and the first woman any of these dudes have seen since the docks at Smolensk. (Fact check: Where did Soviet subs dock? Check later.) Sinister 2nd wants them arrested or shot immediately, because that’s more important than keeping the sub from imploding. We’re supposed to like this guy, obviously.

So, Doctor’s orders, they throw the sub sideways onto an underwater ridge, giving us a nice stable platform for a tribute to another movie none of these guys have seen.

Sini2nd wants them searched, and somehow no one finds anything on Clara. The Doc? Nothing in his pockets but knives and lint. And a Barbie, some string, a half-eaten candy apple, and the sonic. And no knives.

And the Tardis, which is being underused in a very deliberate way lately, storms off in a huff. And Clara is not a strong swimmer. She comes to just in time to see Davos whump the Doc into a bulkhead, demanding answers. And getting them, and before he can say are you taking the piss or what, we get a classic He’s Right Behind You gag.

Kaiju Monster turns out to be GM Skaldak, who has earned a couple of epithets in service of Mars, and who conducts electricity really well.

(As an aside: I hate, hate the Doctor Who Insider interstitials, and I hate even more the artless, momentum-killing way they edit the show to include commercials.)

Skaldak gets stashed in an insanely vast unused space in the sub, restrained with some chains that wouldn’t keep a poodle in the yard. Also he has blasters built into his wrists. Luckily he’s got the whole 5,000 years thing to keep him occupied.

Dr Exposition briefs everyone on the Ice Warriors of Mars, and the Emo Cult of Skaldak. Skaldak, meanwhile, has seen enough 80s movies to know he’s expected to call home.

Sini2nd is happy to employ some mental gymnastics to accuse Doc & Clara of having planted a Western Weapon in 5,000 year old ice as part of a spy thing. That makes much more sense than aliens. Davos tells him to fuck off and fix something. Since negotiations are in order, there’s a bit of back & forth and Clara gets to carry the can. Skally is having a sulk, making Predator clicking noises in his throat. He’s seen a lot of movies for a 5,000 year popsicle. His armor gets satellite TV?

It’s going pretty well until Skally reveals that he’s snuck out of his suit and into a movie that hasn’t been made yet in 1983. Time paradox? And he plays a little cat & mouse with Sini2nd, who reveals himself to be a traitorous psycho, to no one’s surprise. Brief tactical meeting on bridge, more cat & mouse with crew.

Clara hasn’t seen much death, apparently, or at least she hasn’t seen dudes she was chatting with 10 minutes ago in chunks on the deck. Gruff but kind professor tries to take her out of the situation a bit, which works until Skally drops his rather long arms out of the ceiling and starts pawing her head like he’s checking to see if an avocado is ripe.

Also: Skally can summon his armor, all District 9 style. Nice. And he’s pretty determined to take out his grief on the entire human race. We’ve all felt that way, of course. And showdown time in the bridge, and things are looking a bit dicey until Skaldak’s chums show up with a tractor beam and a transporter beam for good measure. Not that they could have taken a god damned second to call ahead and say, hey GM, we’ll be there in five. The tractor beam is apparently the interplanetary version of the douchebag doorbell.

But you can’t complain. World saved. Quick debrief on why the Tardis scarpered, salute the Martians, peace out.

Next week: Ghost hunting! And am I expecting too much of this season? 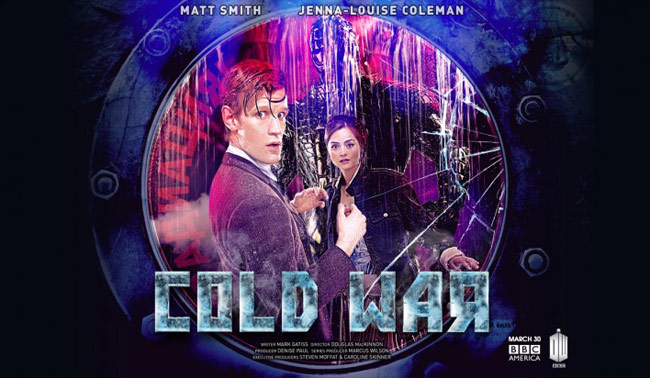 Posted by Will Judy on April 13, 2013. Filed under Headline, Popcorn. You can follow any responses to this entry through the RSS 2.0. You can leave a response or trackback to this entry
Tags: doctor-who, jenna louise coleman, matt smith