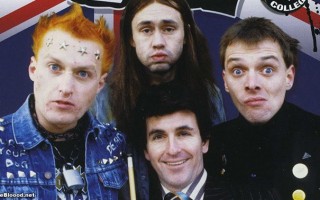 Doctor Who, Episode 713: The Name of the Doctor

Doctor Who, Episode 712: Nightmare in Silver


This week’s episode of Doctor Who opens on the set where Stanley Kubrick faked the moon landing, which has been preserved at Pinewood studios under quarantine as part of an implacable, ossified turf war between a bunch of scary old spooks in MI5 and the NSA. Kidding, it’s some sort of interstellar carnival ride thing […]

Doctor Who, Episode 711: The Crimson Horror


We open our merry Victorian episode of Doctor Who on the set of the Every Sperm is Sacred number from Monty Python’s Meaning of Life. Or as it’s better known, Yorkshire. Edmund has resolved to get to the bottom of this dark and queer business, and rushes off behind the door with the red glow. […]


This week BBC America ran the Torchwood miniseries Children of Earth one episode a night all week building to tonight’s epic finale. Sunday, they will run the whole Torchwood Children of Earth series with all five episodes back to back, so there is still time to catch it. Purely from an entertainment perspective, I recommend […]

Don’t make me get Primeval on your ass!


Primeval is more science fiction thriller fare from BBC America. The real stars of the show are the creatures created for it, particularly Rex, the adorable flying lizard thingie-ma-bob. The series comes from the fine folks who created Walking with Dinosaurs. Walking with Dinosaurs was a documentary about prehistoric animals which presented the film more […]

Torchwood Season 2 Very Out on DVD